I earn my living writing about fishing, hunting, spying on birds, exploring lakes and rivers—just generally poking around outdoors. Tough duty, I know. Now and then, I’ll stop to scribble a few words into the pocket notebooks I carry everywhere. Over the years, they’ve piled up. Here are some entries from my favorite season:

Sept. 21—Suddenly summer’s gone. Air crisp and cold, sky a hard blue, wind persistent from the north. We might have a few more warm days but we know this is it, there’s no going back, time is running downhill and accelerating. At the bottom waits—well, everyone knows what’s waiting.

Sept. 28—Spur of the moment, Kelly called to see if I wanted to fish the Secret River. At the access we rigged up with #8 egg-sucking leeches weighted with small split-shot, and waded downstream, roll-casting to pocket water. Had a bump, made another cast, and hooked a fat 18-inch brown, brilliant with spawning colors. Prettiest trout of the year. 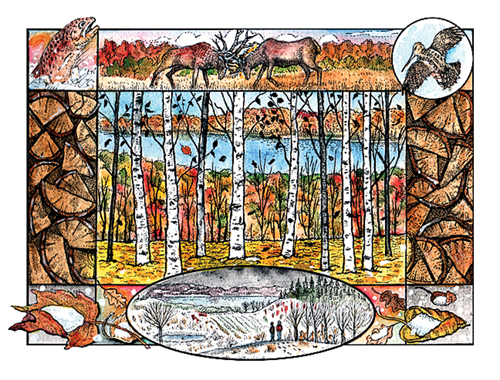 Sept. 30—Last day of trout season and it rained all morning. That’s okay. I’m content to let the season end. But late this afternoon the rain stopped and I threw my gear in the car and hurried to the river to fish the spillway pool. Third or fourth cast caught a 15-inch brown. Beautiful thick-bodied fish with rich, deep, butter-and-oak-leaf sides and vivid red spots. Realized again that brown trout and woodcock are the exact colors of autumn.

Oct. 1—Driving near Frederick, on our way to Tom’s cabin in Atlanta, Tom and I saw two enormous bull elk sparring in a field 100 yards from the road. First they faced each other and lowered their heads, then touched antlers almost politely, as if they were fencers about to begin a match. And then they got down to business.

Oct. 2—Wishing October lasted six months. All the things I like best about fall—grouse and woodcock, salmon and steelhead, crisp air, colors reflected on a calm lake—are best in October.

Monday—Temp. 70, too hot to hunt, most of the leaves still on the trees.

Wednesday—Cold rain and wind in the night: the aspens dumped all their leaves at once. The road’s a yellow river.

Thursday—This morning the water in the dogs’ bowls frozen and the dogs staring in puzzlement. Hunted the Cisco cover with Dave and Coach. No birds.

Friday—Drove to Bergland with Barger for wool socks and whisky. On the way back to camp a flurry of leaves on the highway ahead became a hundred snow buntings rising at once into flight. Every bird wrapped in light.

Oct. 12—A rattle of rain knocking down more leaves. These autumn rains are always the same: frequent, blown on the wind, and in five minutes they’re over.

Oct. 12—Driving two-tracks in the woods with Norris, looking for bird cover. Turned a corner and emerged into open fields with a sudden long view of wooded hills brilliant with autumn colors. Standing at the far edge of the field was a buck with broad, thick-tined antlers gleaming in the sunlight. I scrambled to grab the binoculars from the glove compartment, and Norris said, “I love October. It’s so damned arrogant.”

Oct. 19—Cold morning, a dusting of dry snow on the ground. While I split firewood the dog runs in circles around me carrying a boot-sized chunk of maple in her mouth. She’s like a four-year-old kid pounding the wall with a toy hammer while her dad works on the house.

Nov. 1— Cold wind, scudding clouds, rain running down the windows. Gusts so strong I expect trees to topple. Got a fire in the fireplace, winter coats and hats standing by—I’m ready for it and not ready for it.

Nov. 6—Winter already, it appears. The snow and cold have settled in like guests who show up at the door uninvited, carrying numerous fat suitcases. They walk in and say, “We’ll take the upstairs bedroom. What’s for dinner?”

Dec. 1—Deer season over, venison in the freezer from Tim. Three inches of snow last night. Hiked this morning to the top of Nick’s Hill and looked over the wooded hills bare of leaves. The first snow of the season makes a place that was familiar suddenly seem new and strange. It’s like seeing the world for the first time.

In the 35 years that Jerry Dennis has been a full-time freelance writer he has written 14 books and been published in more than 100 magazines. His new book is Up North in Michigan: A Portrait of Place in Four Seasons, from the University of Michigan Press.