The Michigan Department of Natural Resources has released its annual deer hunting preview just ahead of the deer hunting seasons, which began Sept. 11. Overall, conditions look excellent for the upcoming seasons, and deer hunters can expect hunting to be as good or better than last year.

Hunters who have viewed the 2021 Hunting Digest may have noticed a few regulation changes in place this year, including a universal antlerless license that can be used across deer management units in most of the state. Some northern Upper Peninsula DMUs are closed to antlerless deer hunting, and two U.P. DMUs, 351 and 352, require an access permit along with the universal antlerless license. See pages 60 and 61 in the 2021 Hunting Digest for more details.

“These regulation changes reflect the evolution of deer hunting in Michigan,” said Chad Stewart, DNR Deer and Elk Program specialist. “The last 20 years have resulted in dramatic and sustained declines in hunter numbers. When combined with an abundant and resilient deer herd that continues to grow, and the added challenge of managing deer diseases, a change that represented this shifting dynamic was necessary.”

The 2020 U.P. winter was far milder than normal, a welcome respite for the deer population. The fast spring green-up meant that many adult deer were able to recover quickly from the tolls of winter. With abundant mast (nuts, seeds, and fruits) production in the fall of 2020, deer headed into winter in overall good shape. Population trends seem to be on the upswing this year for the U.P.

Mast production this year seems very spotty. Look for areas with oaks producing acorns, as they are sure to attract deer. Buck numbers seem to be improving, but there are still areas where persistence will be necessary to be successful. Overall, fawn production seems to be good. With the new changes allowing antlerless deer to be taken in the lower two-thirds of the peninsula, hunters have an increased opportunity to fill their freezer for what is hopefully another mild winter ahead.

The DNR is still focusing on chronic wasting disease surveillance in southern Dickinson County after the first case of CWD in the Upper Peninsula was detected in 2018. For hunters interested in getting their deer tested, check out the “For Hunters” tab at Michigan.gov/CWD to view the map of the priority area in the U.P. 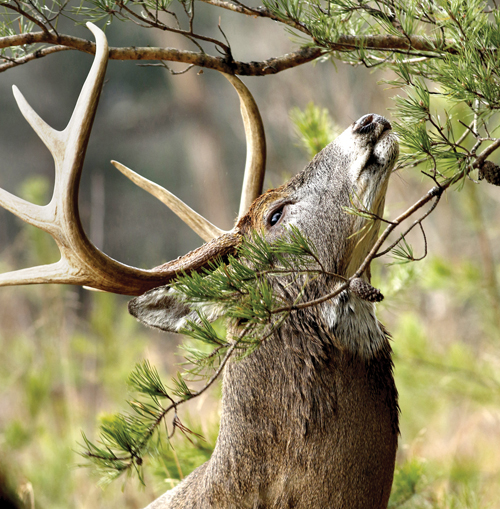 COVER PHOTO: Deer numbers seem consistent with previous years, and as always, there have been some nice bucks observed. Thomas Kirkland photo

The winter of 2020 didn’t have adverse effects on the deer herd in this region due to fewer periods of extreme cold and an overall shorter winter. Another important factor that ensured winter survival was forest management practices (new growth of young trees and leaving treetops from harvested trees) that provided plenty of browse for deer throughout the winter.

The mast crop in the northern Lower Peninsula this year looks good, except in places that were affected by gypsy moth infestations. Those areas are not likely to see much in terms of acorn production. Elsewhere, acorns and soft mast, including apples on old homestead sites, blackberries, and hawthorn are all producing nicely.

Deer numbers look very good in many locations, though it’s important to point out that deer are not evenly distributed across the landscape, and certain areas may hold fewer deer than others. Overall, DNR staff is seeing good fawn production this year, with many twins trailing does.

The spring and summer rains seemed to provide optimal forage for deer, and the bucks have been turning that into nice antler growth. Some reports of people seeing better bucks relative to recent years – something hunters can start getting excited about. In some locations, there is still a long way to go toward balancing the buck-to-doe ratio, so hunters are encouraged to take advantage of new regulations that allow antlerless deer to be taken on the deer and/or deer combo license during firearm and muzzle loader seasons.

Bovine tuberculosis surveillance is still a priority in the northern Lower Peninsula, with testing occurring in the primary counties of Alcona, Alpena, Montmorency and Oscoda, but also in all surrounding counties (Cheboygan, Crawford, Iosco, Ogemaw, Otsego, Presque Isle and Roscommon). T.B. is a significant threat to the livestock industry, and hunters wanting to do their part to assist with surveillance can have their deer tested at any check station this year.

2020 was quite a year in the southern Lower Peninsula, with antlerless harvest increasing 29% from 2019. Buck harvest also increased by over 12%, and – when factoring in deer harvested by deer management assistance permits – nearly 250,000 deer were taken in this region alone. Much of this pressure on antlerless deer has been needed, as numbers throughout most areas have been steadily rising for years.

With winter rarely being a factor for population-level impacts on the southern Lower Peninsula deer herd, the DNR relies on hunters for the bulk of the deer management in this region, and the recent regulation changes seem to be a step in the desired direction for deer management.

The soft mast crops appear weak this year, likely due to the drought conditions experienced through June and the heavy rains throughout July. Though there doesn’t appear to be a bumper crop of acorns in the region this year, some oaks are producing, and for those in an area with acorns, it’s sure to be a magnet for deer in early fall.

With the agricultural fields performing well, deer certainly haven’t been hungry this summer. The corn progression is on par with 2020 and ahead of the five-year average, so with any luck, many of the fields will be picked by the firearm opener, which should lead to continued success this season.

Deer numbers seem consistent with previous years, and as always, there have been some nice bucks observed. The fawns observed are well-developed and on their way to entering winter strong and healthy.

It’s important to note that surveillance for chronic wasting disease is occurring in the southernmost counties of the southern Lower Peninsula. Hunters are encouraged to visit check stations and submit their deer for testing. A complete list of check stations is available at Michigan.gov/DeerCheck.

For more information about 2021 deer hunting regulations, visit Michigan.gov/Deer or check out the 2021 Hunting Digest.

The DNR wishes all hunters a safe and enjoyable season.