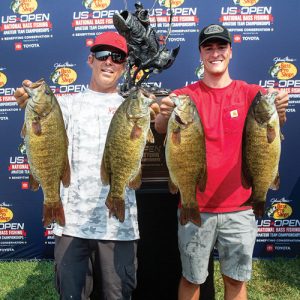 Vande Biezen, from Ostego, MI, and Sturgis, MI, respectively, fished from a Nitro boat and hauled in a five-fish catch weighing 24 pounds to top the 250-team field. They collect a first-place prize of $50,000 and are one of 40 teams to qualify for the National Championship on Nov. 19-21 at Big Cedar Lodge on Missouri’s famed Table Rock Lake. The National Championship will be broadcast internationally on NBC and carries a $1 million cash prize to the winning team.

“We had a lot of success catching these fish deep and guessed we had around a 23-pound limit,” said first-place winner Neil Vande Biezen after winning the first-place $50,000 prize. “We didn’t know how that would stack up at weigh-in, but we’re excited and honored to win our home state event and advance to the National Championship.”

The top 40 teams received a payout and qualified for the National Championship. Additional prizes were awarded for catching the biggest bass within the following categories:

• Biggest Bass: The biggest bass (6.15 pounds) was caught by fishing buddies Joshua Barr and Jeff Thomson from Louisville, OH, and Birmingham, MI, respectively. Barr and Thomson earned $6,150 for the massive catch ($1,000 per pound), will receive a replica mount of the bass with a duplicate going on display at Bass Pro Shops in Auburn Hills, and were entered into a drawing for a Nitro Z20 boat.

Benefiting the Future of Fishing

The Lake St. Clair qualifying event benefits conservation with proceeds supporting The National Fish Habitat Partnership. Thanks to Bass Pro Shops and Toyota, 100 percent of all entry fees – over $1 million throughout the tournament – will fund critical fisheries conservation and habitat projects nationwide. In keeping with its longstanding commitment to conservation, Johnny Morris and Bass Pro Shops partnered with the Michigan Department of Natural Resources to help ensure all fish caught during the Bass Pro Shops U.S. Open regional qualifying event on Lake St. Clair were released responsibly following a fish-friendly weigh-in.

To learn more about the Bass Pro Shops U.S. Open and how to register for the final qualifying event at Bull Shoals Lake, visit www.basspro.com/usopen.