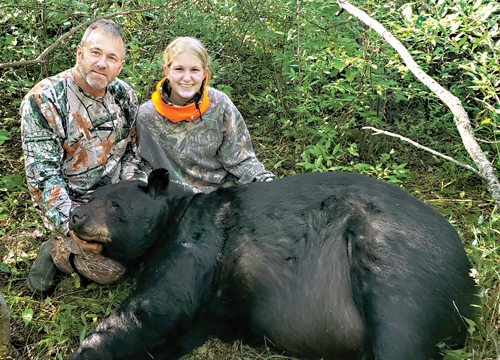 When I was told that a 650-pound bear was killed in northern Michigan, I was taken by surprise, and after I saw the pictures, I was shocked at the size of this bear. I was even more surprised to learn that a 14-year-old hunting with her father harvested this monster of a bear.

Shayna Stagg is the lucky young lady who killed this once in several lifetimes bear. I talked to her father, Ted Stagg, who could not be more excited or proud of his daughter. He told me his friend Tim Butler had drawn a bear tag in the Red Oak Unit and then transferred the tag to Shayna.

Before we go any further with this story, I just wanted to comment on the wonderful thing the DNR does, allowing hunters to transfer their bear tags to youth hunters.

Ted Stagg told me that he had Shayna in the blind with him since the age of six, and she has already harvested a couple of deer in her hunting career.

Ted and Shayna had set up a bait location with a blind about twenty yards away. It was so close if she did not harvest a bear during gun season, she would have a 20-yard shot with her bow in the archery bear season.

Ted said they kept a routine of baiting the stand every day between 10 and 11 a.m. They had several bears coming into the bait, including a bear weighing about four hundred pounds. They named this bear Legs because his legs were short to the ground.

Then there was a Fat Bear, FB, the name of the monster bear that was coming in. FB had a regular schedule of coming in to feed. Then for about five days, he just stopped coming in. They were concerned that he was hitting another bait or just started feeding on acorns. Then he started to show up at the bait again.

On opening day, they had a smaller bear come in and out a few times to feed. Then Legs appeared and stayed at the bait feeding, but no FB. Shayna had Legs in her crosshairs at 19 yards, and her dad asked if she wanted to take Legs, and Shayna turned down a bear that weighed about four hundred pounds. She told her dad she wanted FB!

Most hunters could not pass on a 200-pound bear, yet she passed on a four hundred pounder. You have to give her a lot of credit for holding out for FB; I certainly do. FB may never show again, some other hunter may have shot him, but Shayna was determined to wait and only take FB.

When they left the blind that night, they spooked Legs off the site.

On day two, they got into the blind early. They had baited a little later that day, about 1:30. While sitting in the blind about 4 p.m, Shayna was working on her homework, Dad spotted FB working himself into the bait site, and it didn’t take Shayna long to get ready. FB went up to the bait and stood broadside at 20 yards. Shayna had a perfect hit on this giant bear, and it only ran about thirty-five yards.

Ted never realized how big FB really was and thought FB’s weight would be somewhere around five hundred pounds. Ted Stagg owns his own taxidermist business and has seen hundreds of bears, but never one this big! His live weight on the scale was 647.42 pounds. They were shocked as to how big and how much FB weighted. The green score on the bear’s skull was just under twenty-one inches!

When I talked to Ted about the hunt, you could still hear the excitement in his voice even though it had been a few weeks since then. He is proud of Shayna and how hard she worked on this hunt, making a lot of popcorn used for bait and actively putting it all together with the help of her dad.

It is great that a father can spend such quality time with his daughter, and there are so many life lessons to learn and memories to share and keep for a lifetime. If you need more information on transferring a bear tag to a young hunter, contact the DNR, it is a straightforward process.

The author is Jeff Pendergraff, a retired captain from the Law Enforcement Division of the DNR.