The Muskegon River; A Great Fishery

For the last 10 years, I have fished the Muskegon for steelhead and trout three to four times a year – two or three times in late fall and one or two times in the spring. We fish the river in and around the Newaygo area. We ride in a jet sled with our guide Ross Swanson of Tailwater Charters or Gabe Nyblad of Tail Chasin’ Charters. My wife, Cari, usually joins me. She also regularly outfishes me, and I love it (and her). When she can’t make it because of her teaching job, I bring along one of several other pals (a/k/a victims) like Cal, Pete the Butcher, Doc, Spud, Shmerd, or Craig (who we miss dearly since he passed away in 2020).

It seems like just about everything else in the world “got the COVID” since March 2020 – stores, restaurants, businesses, schools, travel, etc. Thank God that recreating and fishing in the clear fresh air was not seriously affected. Fist bumps instead of high fives and not drinking or eating from the same receptacle – other than that, “fish on” pretty much as usual. 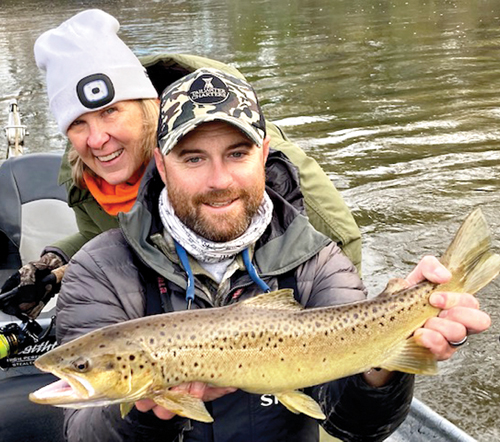 Great fighting, feisty, steelhead up to 15 pounds migrate from Lake Michigan in the fall to gorge themselves on the eggs of spawning king salmon and in the spring to do their own spawning gig. These fish, unlike the kings, do not come up the river to eat or spawn and then die. They do their thing and eventually return to the lake. We religiously practice catch, photo or two, and release. Striking, running, jumping, stripping line, and cutting up like new weed eaters – just a great game fish.

Equal opportunists are native brown and rainbow trout that also feast on the salmon eggs in the fall and steelhead eggs in the spring. Once in a while, you might land a monster resident brown like the one my wife caught in October 2021. All trout are caught and released as well. Are there prettier colored fish on the planet?

Here I try to give you a clear description of the fish we are targeting, the methods, and conditions that will give you the best opportunity to tag into some game fish. Some people think all this information should remain hush, hush, double secret, and I say nonsense. Real outdoor writers and experts like Woods-N-Water News columnists Mark Romanack, Mark Martin and John Bergsma always share the what, where and how of their adventures. I do too.

You can do it in a lot of different ways – posting up and swinging flies with a spay rod, back bouncing spawn, wading with spinning gear on a fly rod. But the method we like is dead drifting beads (a salmon egg imitation) pegged about three inches above a sturdy hook, with a couple of split shots, on medium action 10-foot spinning rods with sturdy reels loaded with 12-pound test mono. The beads are tied in tandem to eight-pound fluorocarbon leaders below adjustable strike indicators (fancy word for bobber). This set-up also works well at the end of an 8 or 9 weight fly rod loaded with sink tip floating fly line. (Line and drift management is a bit more challenging when using a fly rod – so we pretty much stick with spinning gear.)

I received Ross’ permission to reveal this “secret” information; as if I needed his permission. He said, “Sure, but don’t tell them bead color and size.” I said fine. But if I were you, I would try dull pink salmon color and/or dull yellow color on beads about one-third the size of a marble—just saying.

Our guide sets up his boat at the top of a run. As he raises the anchor and we begin to drift, we cast into the top of the run as Ross rows the jet sled to allow the bobber and beads to dead drift over the run to match the speed of the current. The depth from the bobber to the lower bead/hook depends on the depth of run – that’s up to the guide to determine, and you hire them for that knowledge.

You want to drift just above the bottom, ticking the rocks every now and then. Sometimes you do more than tick; bobber down, set the hook, and you’re stuck on a rock, stick or some other river bottom obstruction. Fire up the jet outboard, head back upstream and try to retrieve your beads/hooks. But that’s fishing. Break-offs happen and require several re-ties during a full-day trip.

When the bobber goes down, you sweep set the hook over the motor, and “fish on.” Set the hook with authority – as Ross says, “Give that fish a bad day, not just a toothache.”

Some runs produce strikes; some do not. A good guide will give a promising and historically productive run several tries before moving on – just reel ’em up and motor back up to the top of the run and do it again. When you’re lucky, a single run will produce multiple strikes. A well-netted fish, a photo or two, revive and release – easy!

Flow, water temp, water clarity, and weather conditions play a key role in success (or failure). The ideal flow is approximately 2,000 – 3,000 pfm. However, the flow is affected not just by precipitation but also by the power company guys that control the water released from Croton Dam above Newaygo. Sometimes you’re just at their mercy, and they seem oblivious to your need for a good flow for your day on the river. As with a lot of fishing, overcast is usually better than bluebird sunshine. (Exception would be fishing the flats for game fish in the Keys, Bahamas or other spots like that.) Water temps are ideal in the low 50-degree – high 40-degree range. One day can make a difference. On October 21, the water temp was 62° – fishing was just okay. A serious cold front blasted in that night, and the water temp dropped three degrees to 59. The fish were very happy on October 22 – what a difference a day made.

Rain and even snow do not usually affect the fishing – unless you didn’t bring the right gear to keep you warm and dry. No bad weather – only bad dressers (Patagonia motto), often quoted by Frank Willets of the PM Lodge. But torrential and sustained rains can cause muddy runoff to turn the water quality to look like coffee with cream. On those days, it’s better to stay home, light a fire, pour a drink and play some cribbage.

There are a lot of good guides out there. Our top recommendation is Ross Swanson of Tailwater Charters (Phone: 616-446-8621; E-mail: tailwatercharters@gmail.com). He answers his phone and texts, knows the river, shows up on time and ready, has a good reliable boat, supplies all of the rods, reels and tackle, and will make you a good hot lunch on the river. But call him early – he books up quickly. Tell him Mark and Cari sent you. We fished for years with Gabe Nyblad, but he is concentrating on his Florida guiding operations and doing less and less fishing in Newaygo. Bad news for the resident whitetail population as that is Gabe’s other addiction. His website is www.tailchasincharters.com, and his phone number is 616-889-2584. You can try to coax him out of semi-retirement. Good luck with that one. If you are heading to the lower Florida Keys, Gabe is your guy.

Until next time, Tight lines! Have fun! Catch and release!