Hunters For Life… Making the outdoors accessible to everyone!

When Mark and Scott Evans dreamed up the idea of taking disabled hunter Shannon Kortman on a bear hunt with dogs, the reaction was about what they expected.

“Someone told me I’m an idiot, you can’t take a guy in a wheelchair on a hound hunt,” said Scott Evans, who runs the nonprofit Hunters for Life with his father. “For me, it was like challenge accepted.”

Kortman, a 30-year-old from Holland born paralyzed with spina bifida, has learned to overcome most challenges in life with patience and persistence, along with plenty of help from family and friends. He’s documented his ability to overcome his disability on the Facebook page Anyone Can Outdoors and previously connected with Hunters for Life for an unsuccessful turkey hunt. 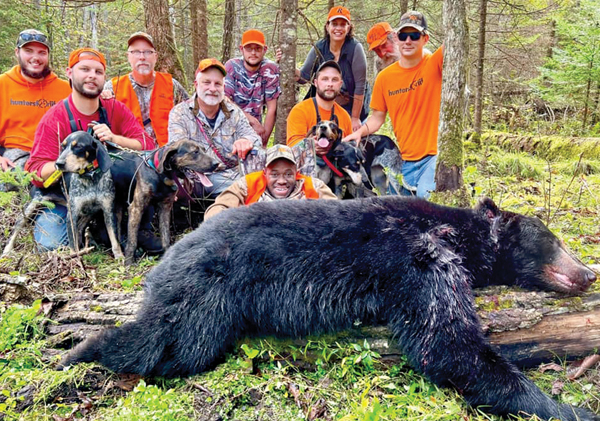 Shannon Kortman poses with a black bear he harvested with the help of the Farmer family and friends and the nonprofit Hunters for Life.

So when the nonprofit got back in touch last fall with an opportunity to hunt one of his three “bucket list” species – bear, moose and elk – the answer was a no-brainer.

“It’s something I’ve been wanting to do for years,” Kortman said.

When Kortman learned he wasn’t drawn for a license, Mark

Evans took matters into his own hands to solicit help on Facebook. Michigan law allows hunters to transfer a license to youth or disabled hunters, and Hunters for Life was committed to exhausting every avenue to make Kortman’s dream a reality.

“We don’t usually go to people on Facebook,” he said.

A post on a Michigan bear hunter page led the crew to the Farmer family, which offered to not only transfer a tag but also host Kortman for a hound hunt in the Gwinn Bear Management Unit.

Jordan Farmer said his father, Dwayne, offered up his license for the third hunt because he wanted to share his passion for hunting bears with hounds, while his mother, Laura, coordinated with Hunters for Life to work out the details.

Kortman said he was ecstatic to hear it worked out, though not entirely sure what to expect.

“I go into any hunting trips with I hope to get one, but I don’t expect to get one,” he said.

Hunters for Life secured a track chair, as well as sleds, a backpack and other options to haul Kortman into the woods when the time was right. Others brought a side-by-side and more manpower, if necessary.

Jordan Farmer said the difficulty of what they were attempting wasn’t lost on anyone.

“I knew it was going to be a tough, tough thing to do,” he said.

On Oct. 6, Jordan Farmer picked Kortman and his crew up at the Moose Resort near Big Bay de Noc, then connected with his brother Justin, who found a nice bear on camera with a white blaze on its chest.

“We caught up with Justin, made a plan, and let the dogs loose,” Kortman said.

“It was a quick hunt, probably cold trailed for 45 minutes, ran for another half-hour to 45 minutes to get him treed,” Jordan Farmer said.

Kortman said the two hours between releasing the hounds and arriving at the tree “felt like an eternity.”

The dogs bayed the bear seven-tenths of a mile from the road, through thick woods and brush that made it obvious most of the options to get Kortman to the tree were not going to work.

“It was so thick in the woods,” he said.

A ride in the side-by-side made it a few hundred yards, while the sled hardly worked at all, Kortman said.

Ultimately the crew resolved to simply take turns hauling Kortman on their backs the rest of the way in, something Mark Evans said he accidentally predicted months before.

“When we contacted Shannon, I told him if we have to carry you in on our backs, we’re going to get you a bear, and that’s exactly what we did,” he said.

“It was pretty thick, but just the length – seven-tenths of a mile in – is quite a ways,” Jordan Farmer said. “We all kind of switched off and got him in there.”

“I could not believe it,” Kortman said. “It had been close to an hour and a half, two hours, and the dogs still had the bear up the tree.”

Kortman attempted to use a turkey hunting chair to aim at the bear, but the angle was no good. Instead, he put his hand on his knee and “freehanded it,” he said.

The first shot from his .450 Bushmaster hit behind the bear’s shoulder, and it buckled and shifted to the other side of the tree. The second blast was a fatal shot, and the bear fell.

“I couldn’t believe it,” Kortman said. “I was in awe. I was excited. There were so many emotions going through me.”

“He was thrilled, and it was awesome to see,” Farmer said, describing the hunt as “the most rewarding and emotional” experience.

“It was very emotional to just be able to help someone out and fulfill his dream like that,” he said. “It was the best hunt I’ve been able to be a part of.”

It was precisely the kind of emotional experience Hunters for Life aims to create by helping to connect folks in difficult situations with outdoor experiences they won’t forget. The connection changes the lives of both the hunters it helps and the professionals that donate their time and resources to make it happen, Mark Evans said. “The biggest thing is not the physical people we’re taking out,” he said, “it’s the way people look at things.”

“It definitely opens your eyes to try anything,” Farmer said.

For Kortman, his dream became a reality when he posed for pictures with his new friends and the 187-pound boar they helped him harvest.

“They picked him up and brought him to me,” he said. “It was one of those moments, I can’t believe it came together so perfectly.”

Scott Evans agreed, “It was definitely the most challenging thing (Hunters for Life) has ever done,” he said.

Mark Evans started the nonprofit after Scott lost his eyesight to a rare condition called Stargardts in his late teens to illustrate how it’s possible to overcome disabilities and difficult life situations to pursue a passion for the outdoors.

After college, Scott took over most of the operations for Hunters for Life, shepherding numerous folks with disabilities, veterans and others on outdoor expeditions, from ice fishing to goose and duck hunting, running bear baits and bass fishing fundraisers.

Scott relies heavily on volunteers and generosity from the hunting community through HuntersforLife.com. Kortman’s hunt was no exception, made possible by the Farmers, their friends and family, and many others who attended to make it a success.

“If we didn’t have the help we had, we would have been in trouble,” Scott Evans said, adding the generosity extended to the meat processor, as well. “Soderman’s in Gladstone … wouldn’t take any money from us.”