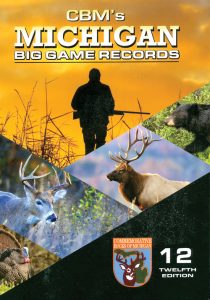 If you are interested in the latest information about the highest-scoring deer, bear, elk and turkeys taken in Michigan through 2020, you will want to purchase a copy of the 12th edition of Michigan Big Game Records, published September 2021. The large-format, 256-page book includes all representatives of those species in state records maintained by Commemorative Bucks of Michigan (CBM) through March 2021. Entries from 2018, 2019 and 2020 have been added to this edition.

Each listing contains information about what county the critter was shot in, what it was shot with, the year it was taken and who the successful hunter was. CBM has separate categories for firearms, including centerfire rifles and shotguns, muzzleloaders, handguns, bow and arrow (vertical bows) and crossbows. Deer and turkey records are broken down into county-by-county listings, so it’s easy to quickly find out what the highest-scoring deer or turkey taken with gun or bow was for every county in the state.

County-by-county turkey records are broken down by single beards, the most common, and multi-beards. No turkey records are listed for four U.P. counties: Keweenaw, Ontonagon, Baraga and Luce. I’ve seen long beards in Keweenaw County, but there may be little interest in hunting them that far north or hunters who have bagged those that qualify for state records haven’t entered them. Only one record book bird is listed for Gogebic, Houghton and Mackinac counties.

Even though there are no county-by-county listings for bear and elk in the book, maps at the beginning of each of those sections show the number of entries for each county in the state. Similar maps appear at the beginning of the county-by-county sections for deer and turkeys, too. So it’s possible to quickly find out which counties produce the most record book animals by looking at those maps.

Jackson County has the highest number of deer entries for the state, for instance, at 1,055. Washtenaw isn’t far behind at 992. Menominee County leads the state for bear entries at 117. Marquette County is a close second with 104.

The book also contains lists of the best typical and nontypical whitetails taken with centerfire rifles and shotguns, muzzleloaders, handguns, vertical bows and crossbows. Bear and elk records are broken down the same way. Only three bull elk shot with muzzleloaders are listed. There are no entries for elk in the archery category.

The top 100 typical and nontypical bucks taken in the state, regardless of weapon used, are also listed. The top 100 single and multi-bearded turkeys are included in still more lists.

The collection of photos in the book adds to its appeal. The book includes 150 photos of hunters with their trophy deer, bear, elk and turkeys.

In order for animals to qualify for state records, measurements of the antlers, skulls, beards and spurs must meet certain minimums. Those minimums are listed on page three of the record book. Antlers are measured on deer and elk. Skulls are what qualify bears for record book entry.