Catching panfish on first ice is not rocket science. Bluegills, sunfish, crappies and perch are still relatively active when ice first forms. It’s basically an extension of the hot fall fishery for a while. Weeds are still green and producing oxygen, waters are not super chilled yet, and panfish are still actively feeding. You can get away with heavier line, larger floats and jumbo wax worms on first ice and still catch panfish.

Things change, though, as winter deepens. As weeds die, they become less hospitable to panfish. Oxygen levels plummet, and oxygen-starved panfish become increasingly dormant. Forced out of the weeds, panfish are on edge because they are more vulnerable to predators. Preferred food sources go into a state of torpor, too. Once active, insects go into a hibernation-like state. Panfish take up stations deep in suitable weeds for extended periods and only move out for brief periods to feed.

“On a lake you haven’t fished before, the best place to start is where all the locals have been fishing,” advised ice-fishing expert Myron Gilbert. “If the fish were there earlier in the year, they haven’t moved too far. We start by looking at a map and then find secondary locations that might be shallower or deeper than where everyone has been fishing.”

“Finding fish is a priority. To do that, you need to drill holes,” shared Gilbert.

How you make the holes is up to you. “We have gone almost exclusively to electric drills. If you take a quality 18-volt lithium battery industrial-quality hammer drill and put a Clam Auger Plate (stores.clamoutdoors.com/clam/augers/drill-auger-conversion-kit.html) on it, you can drill 100-plus holes in a day. You don’t have to worry about starting, cords pulling out or fumes.” Gilbert said the electric drill works well on holes up to 6 inches. He said he generally drills 5-inch or 6-inch holes if there’s a chance for bigger fish.

I have a gas-powered Strike Master Laser Mag drill with a chipper blade that starts every year with a little starting fluid. The auger has had more birthdays than Miley Cyrus. Making holes is more important than how you make them.

Gilbert said they start by drilling holes in a 50-yard circular pattern around an area that holds potential. One angler drill holes while the other follows using a LCG to search for fish. Underwater cameras have shortened the searching process. 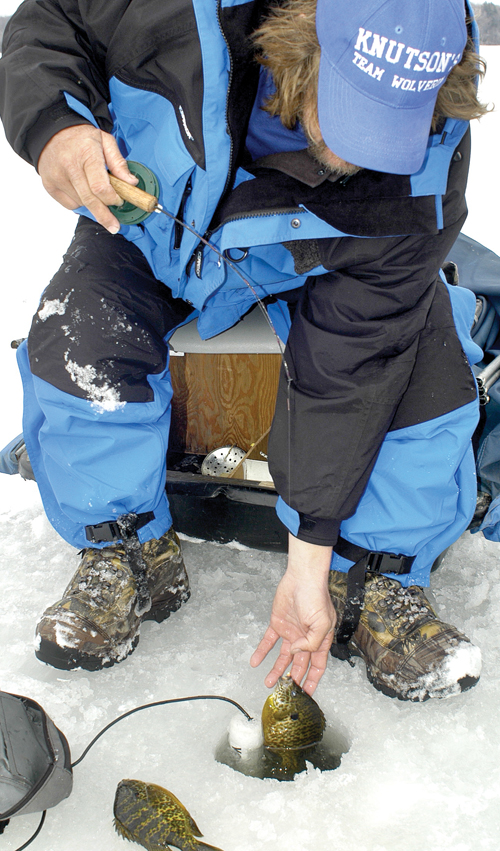 Joe Pikulski with a sunfish caught during the winter doldrums. Mike Gnatkowski photo

“Cameras are extremely helpful in the winter because the water is so clear,” said Gilbert. He said he has used the Marcum and Aqua View cameras with equal success. “Seeing that there are fish down there gives you some confidence. You can’t tell the size very well, but you can tell big ones from little ones. The cameras work well in deeper water, too. Under the right conditions, you can see very well in 25 feet of water or more.” The cameras have become increasingly user-friendly, with versions that can fit in your pocket.

Nothing replaces the act of fishing for determining an area’s potential. Gilbert said he uses a flasher to prospect the circle of holes to determine the type and size of the fish present. Holes that produce decent fish are noted, and more holes are drilled in the vicinity. Soon the spot-on-the-spot is zeroed in on. “When in doubt, drill twice as many holes as you think you’ll need,” said Gilbert. “Then you have some options.”

Where you begin fishing often has a huge bearing on what kind of panfish you can expect to catch. “Bluegills are structure orientated,” Gilbert said. “Usually, you’ll find them in the weeds if they’re inactive or just outside the weeds if they are active. Bluegills are bug eaters, and most of the bugs are going to be in the weeds.” How deep bluegills and sunfish tuck into the weeds depends on their activity level, which is usually low in the dead of winter. Panfish tucked into the weeds often don’t show up on the electronics. Underwater cameras can give you a clue if fish are present then.

“If you can sight-fish, you can determine the activity level and attitude of the fish,“ added Gilbert. “By using our Aqua-View camera, we can see fish in the weeds, and it answers the question about why we’re catching fish in a certain location.”

Where you find fish can determine your fishing technique. If you find bluegills packed deep into the weeds, you need to fish a little more deliberately with smaller offerings and finesse tactics. Experiment with colors and gentle quivers or no movement at all.

“Bluegills are much easier to catch when they move out of the weeds and go on the feed,” advised Gilbert. “But those movements are going to be much more subtle during the dead of winter if they take place at all.”

Yellow perch can be found in the main lake basins during midwinter. Perch scrounge for minnows, crayfish and wigglers in the marl and muck. They are usually very bottom-oriented, which helps locate them.

Crappies, on the other hand, can be found somewhere in between. Crappies and bluegills will mix. Crappies will suspend over open water or use weeds like bluegills. Generally, when you find crappies in the weeds, they’re more aggressive than the bluegills and sunfish. Determining what kind of fish are present has a large bearing on bait and jig selection.

Bluegills like bugs, so you want to use meat for them, either wax worms or spikes. You can fish them on vertical or horizontal jigs. Jigging is really a misnomer for midwinter panfish. Because they are dormant, very subtle quivers, jiggles, swimming and do-nothing jigging scenarios work best.

“Always start above the fish and jig down,” advised Gilbert. “Panfish have their eyes on the top of their heads, and they’re always looking up. During the middle of winter, you want to use more subtle jigging action than you would on first or last ice. The fish are relatively inactive, so use a smaller jig, especially for bluegills and sunfish.

Gilbert is old school when it comes to tackle. “We still use the Schooley Ice Rods (http://www.schooleyicetackle.com/poles.) I haven’t found anything better for preventing line twist. And we still use monofilament. Braid tends to freeze in the winter, and it is much more visible.”

Many pros swear by fluorocarbon lines designed especially for ice fishing. While fluorocarbon is much less visible under the ice, it does tend to coil more in the cold, especially when it’s spooled on smaller diameter ice reels. Where you might be able to fish the same braid for a season or two or monofilament for a half dozen trips, you’ll find yourself replacing fluorocarbon much more often. There’s no need to fill the whole reel, though. Just put 50 or 60 feet of fresh line on if you see the line beginning to coil. The thin diameter and refractory quality of fluorocarbon may be just what you need for fooling midwinter panfish.

New straight–line reels excel with fluorocarbon lines and make for a sensitive ice-fishing rig. I have several Frabil (http://www.frabill.com/ice-fishing/ice-rods-reels-combos/combos.html) straight-line combos. Their Black Ops and straight-line combos are the perfect medicine for finicky winter panfish.

Tungsten jigs have been all the rage in the ice-fishing world. “I’ve been using Fiska jigs for years,” shared Gilbert. “They get down fast, have a durable paint job and sticky sharp hooks. I mainly use the 3, 4, and 5mm jigs. Usually, they’ll have some glow in them. Fish can see glow jigs twice as far as regular jigs. That doesn’t mean that they eat them any better. It’s just the fact that I know they’re seeing them. You don’t want a jig that glows real brightly. Jigs that have a more subtle glow seem to work better.”

Custom Jig and Spins (https://customjigs.com) makes a complete line of ice fishing jigs that fool even the most discriminate panfish. Their tungsten Chekai, Glazba, JaJe Bug, and Magnum Chekai jigs cover the gambit of panfish moods with a wide array of shapes and colors.

There are basically two schools of thought when it comes to bite detection. Some ice anglers are line watchers; others use sensitive spring bobbers. Best may be a combination of both. Gilbert is an adept line watcher. The bite of midwinter panfish is often nothing more than a kink in your line. For those of us that would end up with a kink in our neck straining while line watching for hours on end, there are spring bobbers. Spring bobbers allow anglers to cheat a little and to fish multiple rods. One of the first spring bobbers I used was the Gotcha Spring Bobber. Most would expect a spring bobber to bend down when you get a bite. In mid-winter, your spring bobber often comes up.

Because crappies and perch are minnow eaters, horizontal jigs are better suited for targeting them. A horizontal jig and plastic look just like a minnow to perch and crappies. Lures like Northland’s (https://shop.northlandtackle.com/soft-plastics/shop-by-species/panfish) Impulse Mini Smelt and Mimic Minnow do a great job of imitating perch and crappies forage. Because the lures are scent-enhanced, there’s no need for live bait. Other Impulse plastics imitate bloodworms, mayflies, stoneflies, grubs and larva that can be used when the panfish bite is hot.

Gilbert and friend Joe Pikulski joined me a few years ago in mid-winter on Hamlin Lake. Hamlin Lake is one of Michigan’s premier bluegill lakes, and it has a fairly good population of crappies and perch, too. I lived on the lake for more than 20 years, so I was well acquainted with the fishery.

There’s a hot first-ice fishery that develops on the upper lake. It’s not uncommon to see 100 anglers on the ice when word gets out in late December and early January. Gradually, the bite fizzles, and the anglers disappear. Everyone assumes the fishing is done.

It was early March when Gilbert and Pikulski joined me. I hadn’t heard of anyone making any significant catches of panfish in months. “Don’t worry,” they said. “Bluegills and sunfish never move far.”

The pair started their routine of drilling holes in a wide circle. We started hopscotching each other, making note of where we caught or marked fish. Soon a few panfish lay on the ice near productive holes, and Gilbert set about drilling more holes near them. “Where you find small fish, you’re usually going to find a few big fish too,” he said.

It was like closing a steel trap. Gilbert fired up the auger one last time and drilled even more holes close to the ones that had produced keeper fish. Then it was just a matter of hole-hopping. Each hole would produce a good-sized ’gill or sunfish or two before the school would move. Give it a rest, and you could come back and catch a couple more. More than a dozen largemouths put our frail ice combos to the test. By the time we decided to quit, we had 65 hand-sized bluegills and sunfish on the ice. There wasn’t another angler around.