One of the most unique yet ubiquitous bird species in the Mitten State is the osprey. Here are some terrific and talon-ted tidbits about those beautiful, bountiful, and brash birds:

The Name Game: The scientific name of the osprey is Pandion haliaetus. The genus name derives from a mythical king of Athens, Pandion, whose daughters were turned into birds. The species is also Greek and comes from the words halos (sea) and aetos (eagle). Accordingly, another common name for this avian species is sea eagle, along with sea hawk and fish hawk. The French common name has a fun translation. It’s balbusard pecheur which means “bald buzzard fisherman!” There are only two representatives from the genus Pandion worldwide, the other being the Eastern Osprey found only in Australia and Tanzania. 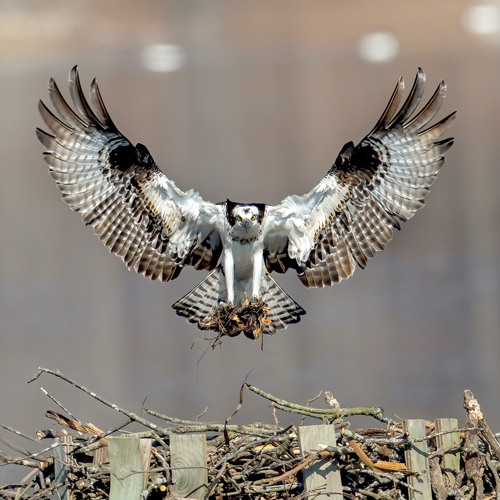 An adult osprey glides to its nest with more material to bolster the structure for its future family. (copyright photo Joni Roberts)

Tale of the Tape: Osprey possess a wide wingspan that can stretch to over five feet across, yet the birds weigh on average only three pounds. All birds are much lighter than they appear as they possess layered feathers and hallow (pneumatized) bones. These bones are filled with air to make the bird lighter for flight and allow more oxygen to reach the blood, providing extra energy for activities.

Purdy Birdies: Osprey are stunning birds with bright white breast plumage and brown speckling. They are dark brownish-black above with a white head and dark brown crown, and streaked cheeks. From below, the wings are mostly white, with a prominent dark patch at the wrists. Juveniles have white spots on the back and buffy shading on the breast. Females are up to 15% larger than males, and both sexes achieve their full adult plumage at 18 months of age.

Speed Demons: Osprey can fly at a sizzling 80 miles-per-hour and have excellent maneuverability to navigate their air and water habitats.

Particularly Piscivorous: Osprey have a very picky palate in that they exist almost exclusively on fish. Worldwide, around 80 fish species make up about 99 percent of the osprey’s diet.

Fishing Phenoms: With needle-sharp talons, and extraordinary eyesight, osprey are amazing anglers. They can plunge to three feet deep in the water and can surface with two, or even three, fish at a time! Studies revealed that osprey fly 30 to 130 feet in the air and dive, typically feet first, into shallow water to capture their prey. They are successful in 25 percent to 75 percent of their dives, depending on weather conditions, currents, and experience.

Adaptable Avians: Osprey have a veritable plethora of adaptations that make them deadly fishers. For example, they can completely close their nostrils during water dives. They also possess nictitating membranes, a clear third eyelid, that act as goggles helping them see clearly underwater. Additionally, these fish hawks have an outer toe angled backward to better grasp fish.

Head Hunters: Adult osprey will often devour the head off of the fish first before bringing them to the nest to feed the chicks or mate. Ornithologists hypothesize that the head is the most nutritious part and gives the active adults the energy they need to hunt and feed their families.

One and Only: Remarkably, as recently as 2002, only one active osprey nest was found in all of southern Michigan. Ospreys, like other top predators, including bald eagles and peregrine falcons, were decimated by the negative effects of the pesticide DDT on their egg development. Thankfully, the ban on DDT and habitat restoration has allowed osprey to make a booming comeback, and now the birds are found in every Michigan county.

Rough on Rehabbers: Expert licensed rehabber, Kevin Smyth, reports that because of their unique diet, osprey are among the toughest raptors to rehab. He said, “They are challenging because they will not eat on their own. We always end up having to hand feed them fish. One rehabber who works with them a lot found that they will eat if several of them are being raised at the same time. Once their competitive nature kicks in, they will take a fish on their own!” He added sarcastically, “At least they don’t suffer from the effects of eating a rodent that has been killed by rat poison, which is an all too frequent and sad occurrence with many other raptors we get.”

Bird Behavior: An extensive osprey study revealed that they possess eight distinctive vocalizations to express feelings, including alarm, excitement, and requests for food, and 11 physical displays to convey messages of rest, protection, courtship, and attack.

Migrating Mania: Osprey are found on all continents except Antarctica. Some of these majestic birds migrate, while those in warm climates stay put year-round. Among those that migrate, some travel a remarkable 5,000-miles. Our birds may fly from the Amazon basin, across the Caribbean Sea and up the Atlantic Coast before ending up at their breeding sites in Michigan!

Age Attributes: Ospreys typically live as long as 15 to 20 years, and the oldest known individual was just over 25 years old. During that long lifetime, these frequent flyers can rack up over 160,000 miles of travel.

Romantic Raptors: Osprey pairs are generally monogamous and often mate for life. The male selects a nesting site near or over water, and both sexes collect sticks and other nesting materials together, but the female generally arranges the nest. The female lays from one to four eggs, but usually three, in the spring. The chicks are born covered in downy feathers and are completely dependent on their parents before fledging at about 60 days. Immature ospreys will stay in their southern wintering grounds for two to three years before returning north to make their first attempt at breeding.

Dancing Dudes: To attract a mate, male ospreys perform an aerial display known as the “sky-dance.” During the dance, the male brings food or materials for the nest while hovering, wobbling in flight, and making a screaming sound to attract a female.

Three’s a Crowd: A mated pair of ospreys is called a “duet.” They are highly territorial, especially during mating season, and violent mid-air tussles can occur if an interloper flies into a nesting pair’s territory.

Mascot Mentions: A few notable sports teams that commemorate osprey, or their kind, would be the 2014 Super Bowl champion Seattle Seahawks and the 2019 NBA champion Toronto Raptors (although it’s the dinosaur they are celebrating).

Those are some fabulous, fun facts about those fantastic, feathery fishers, the ospreys. With good fortune, you will happen upon one in the woods and waters of the Wolverine State!