It’s been said by many an angler that “a jig is a jig” regardless of brand or advertising claims. The truth is, the modern jig fisherman has so many jig shapes, sizes and designs from which to pick, this adage is clearly no longer true. A jig isn’t just a jig anymore, but rather a somewhat sophisticated fishing tool that can make or break walleye fishing success on any given day.

Jig design plays a huge role in how these lures function and, for the record, can and often does help anglers catch more of the fish that bite. The more an angler learns about jig designs and jig fishing strategies, the more successful they will become on and off the ice. It’s amazing how something as simple as a hook molded into a chunk of lead can play a major role in modern ice fishing methods.

It’s fairly easy to divide jig designs into easily understood categories. A couple such categories include long shank and short shank hook designs. The long shank hook design so common on ball head style jigs dominated the jigging scene for decades. Then some smart cookie decided that shortening the hook shank would make a more compact and useful jig fishing tool. Quickly, the short shank jig became known as the “live bait” jig, because for the most part, these jig designs are not intended to hold soft plastic grubs but rather designed to present live baits like minnows.

The adage that a little information is dangerous applies in this case. Because short shank (live bait) style jigs have become so widely popular, anglers frequently use them for applications they clearly weren’t designed.

Case in point, the ice fisherman after walleye, is forced to vertical jig by the vary nature of ice fishing. Short shank jigs are designed for casting applications and, when used in a vertical jigging situation, are far less efficient at the task of hooking fish than a long shank jig design.

While a short shank jig design makes for a compact lure and live bait package, the lightest part of the jig/minnow presentation is the minnow, not the jig. When a minnow is pinned tightly to a short shank jig, and a walleye attempts to eat it, something that may surprise most anglers often occurs.

The walleye feeds by inhaling food, opening its mouth and forcing water in and past its gills. This process sucks food into the mouth, and the gills act like prison bars preventing the minnow from escaping out the back door!

When a jig/minnow presentation is inhaled, the minnow spins around and enters the mouth first because it’s the lightest and most influenced by the suction being created. This is good, but often the suction is only strong enough to cause part of the jig/minnow to actually enter the fish’s mouth. The angler, of course, feels the bite and sets the hook only to find the minnow torn free from the jig and a missed opportunity. 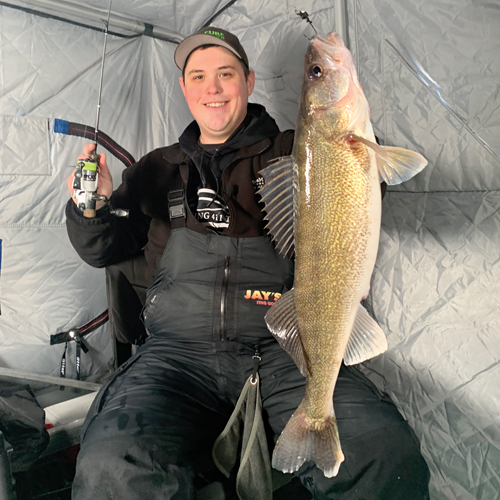 Long shank jigs are typically the best choice for walleye ice jigging applications. The long shank jig is a superior design for tipping with a live minnow as the hook point routinely ends up deeper in the fish’s mouth leading to a higher hook up ratio.

Making the simple choice of using a long shank jig instead of a short shank jig while ice fishing does make a difference and will put more fish on the ice.

Some years ago, a version of lead heads, known as stand up jigs, started becoming popular. The head design of these jigs forces them to sit on the bottom with the hook point and bait pointed up off the bottom. You don’t have to be a rocket scientist to recognize the value of this jig design in that it positions the business end of the jig where it needs to be to effectively stick the fish that bite.

Stand up jig designs are collectively good for many jig fishing situations, including ice fishing. A few pitfalls do need to be avoided. Some stand up style jigs are built on long shank hook designs, and others use short shank hooks. It’s best to use the long shank designs for ice fishing applications.

Some stand up style jigs are also made featuring tempered hooks that are rather large in diameter and, unfortunately, more difficult to penetrate the tissue of a walleye’s mouth. Jigs made with thin wire hooks are far superior for walleye jigging applications because they stick and hold with a minimal amount of pressure.

Stand up style jigs are a good thing and, when used in ice fishing situations, can play a major role in hooking and landing light-biting walleye. Some of the top stand up style jigs on the market include the Bait Rigs Odd’ball, Fin Tech Nuckle Ball and Northland Lipstick Jig.

A few manufacturers produce special purpose jigs with small wings or fins that allow these lures to glide when dropped. This unique falling action slows down the drop time and allows the jig to fish out a little further in diameter from the center of the ice fishing hole.

When dropped on a slack line, a gliding jig will plane out to the side a few feet, when jigged, these lures dart and circle, giving them a completely different look compared to the ordinary lead head jig that rises straight up and falls straight down in the water column when jigged.

Adding stuff to the gliding jig like a live minnow or plastic tail reduces their planing ability to a degree. Still, this jig style is unique and exceptionally useful when fishing in slow-moving rivers that freeze in the winter. On rivers, the current would cause an ordinary jig to spin and eventually twist the line. Gliding jigs swim nicely in the current and don’t tend to spin or twist the line as readily as ordinary lead head jigs.

Gliding jigs are also useful for lake fishing applications and can be used in place of other jigging/swimming style lures like the popular Salmo Chubby Darter or Jigging Rapala.

Adding a spinner blade, flipper, or rotating prop to a jig converts it into an attractor-style jig. Many of these products are available, and most of these lures do a fine job of adding additional flash and vibration to the presentation. In general, attractor jigs work best in off-color water. The more clear the water becomes, the less productive an attractor jig tends to be.

Because the blade or other attractor tends to create resistance in the water, most anglers find they need to fish a somewhat heavier attractor jig compared to the weight they would use with an ordinary jig. Going up one size is a good rule of thumb when fishing attractor jigs. For example, if you’re normally fishing a 1/4 ounce jig, the best attractor jig for this situation is going to be a 3/8 ounce model.

Does the head shape of a lead jig make any real difference in how it performs? The short answer is sometimes, but in the big picture, the shape of the jig head is usually a minor consideration for jig fishing applications. It could be argued that a bullet-shaped jig head is better able to pass through the water than a round head jig. This may be true but nearly impossible to measure in any means that an angler is likely to understand or benefit.

In short, head shapes on jigs can be important in the case of stand up style jigs where the head actually provides a function. In most other cases, the head shape is simply a cosmetic issue and nothing that will impart special action or make the jig catch any more walleye.

Most jigs are painted by dipping them in paint, filling the hook eye with paint. A few manufacturers remove this paint before it can dry, but most leave this task up to the owner of the jig. Using a hook point from one jig to punch out the eye of another is not a good shortcut. Devices designed to remove the paint from the hook eye are handy items every angler should own.

A few jigs have open-eye designs that make them very easy to tie on, even in low light conditions. The Bait Rigs Odd’ball, the Fin Tech Nuckle Ball and Zone-R are noteworthy examples.

Any jig used for ice fishing is best equipped with a stinger hook. This goes double if the bait used is a live minnow.

Walleye are notorious for being light biters, and the stinger hook helps to hook more of the fish that bite. It could be argued that some stinger hooks make the jig and minnow combination more “mechanical” and lead to fewer bites. Perhaps this is true, but the best stinger hook designs minimize the mechanical properties and do an excellent job hooking and landing walleye.

The vast majority of stinger hooks are made using small (No. 10 or No. 12) treble hooks and produced in a wide variety of designs ranging from models featuring steel leader material to those tied using braided lines, monofilament, and even fluorocarbon lines. The more flexible the material used to tie a stinger hook, the better they perform. The ideal stinger is produced using 8-10 pound test super braid, monofilament or fluorocarbon fishing lines that are strong enough for the task yet flexible enough to allow the jig and minnow natural action.

To perform properly, the stinger hook must be long enough to reach at least the minnow’s dorsal fin. This requires a stinger hook that’s approximately 3-5 inches long for best results. One of the best stinger hooks I’ve used is produced by Golden Gator Tackle Company and is called the EZ Cinch Stinger. This unique stinger design makes it easy to slip the stinger over the hook point and remove it as needed to add live bait or a soft plastic offering.

Jigs do an amazing job of catching walleye year around. When it comes to ice fishing with jigs, no other lure group can compare with the track record special purpose jigs bring to the party. Choosing the best jig for the job refines a classic presentation and puts more fish on the ice. Isn’t that what ice fishing is all about in the first place?