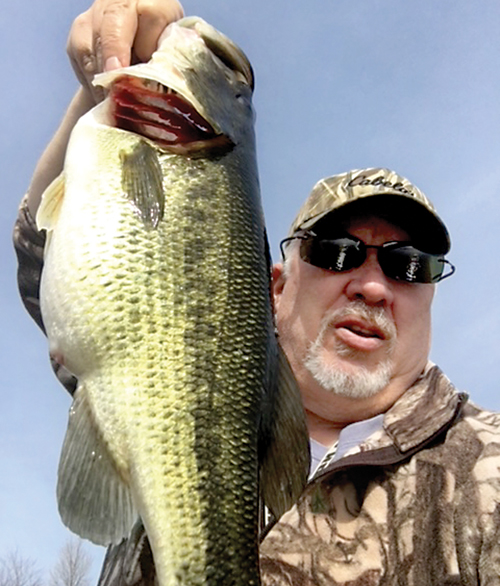 The author’s early ‘catch and release’ season largemouth tipped the scales at 8.2 pounds and was over two feet long.

Not too many folks in our state complain when they accidentally hook a nice bass. They could be panfish or pike fishing, but bass always brighten a day of fishing when they barge in and take the bait. Both small and largemouth have offered so many pictures for the family fishing picture wall. A while back, I was going through a junk drawer and found one of my father-in-law, who passed away 15 years ago, holding a 14-inch largemouth. You would have thought he was Jimmy Houston and had just won the Classic. Every time I see that picture, I chuckle, then throw it back in there so I can run across it again in the future.

Black bass are one of the few fish that are probably more prevalent in Michigan than walleye. They are seemingly in every inland lake throughout both peninsulas, are doing very well in several of our Great Lakes and Lake St Clair, and chances are if you cast a crank bait in most farm ponds in your neighborhood, the first thing hooked will be a big ole bucket mouth. They are one species that even a fingerling of four inches will hit a six-inch stick bait, and a master angler big mouth will sip a tiny popper. They are fearless and provide a great battle and will often get everyone in surrounding boats yelling and cheering when a youngster hooks a good one.

Smallmouth are not quite as prevalent in the small inland lakes as their black bass cousins, but there may be more of them in the Great Lakes and St. Clair and some of Michigan’s larger inland lakes. Smallies are extremely addictive, and once they are targeted successfully, the tackle box seems to go into a smallie transition. They are bulldogs. They will pull the boat’s bow fully around, upstream, into the wind, with the anchor out. Well, that may stretch the truth some, but they are one of the strongest freshwater fish. They will break lines, then break rods and finally break the angler’s heart when they are lost at the boat.

Michigan has some world-class smallmouth angling opportunities. Lake St. Clair has been listed as one of the best fisheries on the planet; plus, Michigan has numerous big inland lakes that have consistently produced smallies that make you say, “Wow!” Hubbard Lake near Alpena held the state record in 2015 with a 9.33-pound smallie. The previous record had stood for 109 years! We would think this was an amazing, rare record breaker but then only one year later, in 2016, that record was smashed with the current state record, a 9.98-pound smallie caught on the Indian River, which connects Burt and Mullet Lakes in northern lower Michigan. Obviously, the State of Michigan has a remarkably diverse smallmouth fishery.

While the largemouth record has stood since 1934, some giant fish are taken around the state. Still, it is usually during the catch and release season, which runs from January 1 to the Saturday before Memorial Day. I was recently fishing my small inland lake and was in a bay casting a floating Rapala and hooked what I thought was a pike as it stayed down, and I could not get it to the surface. When I finally got a look, it was a giant largemouth. I scrambled down to the floor of my boat to get my hands on it. She ended up 8.2 pounds and went 24 1/4 inches long. She was full of eggs, and she was mad as hell that she fell for the ole Rapala. I quickly snapped a selfie, kissed her and let her go. Hopefully, I’ll coax her back into my boat when she is a 12-pounder.