One of Michigan’s most marvelously mesmerizing bird species are those grandiose, goliath-esque Great Gray Owls (referred to, herein, as GGOs). It’s time for a tally of tantalizing tidbits about these remarkable, yet rare, rat-slaying raptors:

The Name Game: The scientific name of Great Gray Owls (GGOs) is Strix nebulosa. Both names are Latin in origin. Strix means “to utter a shrill sound,” acknowledging their calls, while nebulosa translates to “misty or cloudy” in reference to their gray color. First described in 1772, other common names for these bodacious birds are Lapland owls, Siberian owls, sooty owls, bearded owls, and spectral owls. Often difficult to discover, GGOs are also referred to as the Phantoms of the North. There are 23 species of Strix – whose members are known as wood owls – worldwide, of which only one other, the barred owl, resides in the Mitten State. 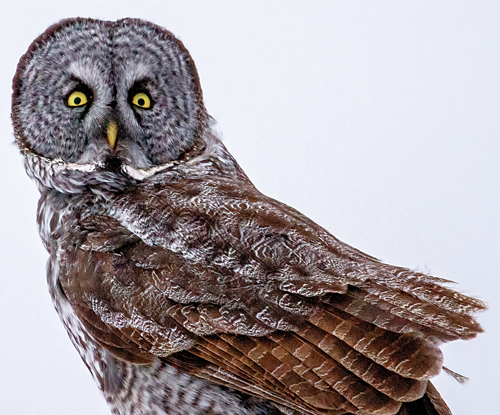 A close up of a Great Gray Owl demonstrates the massive facial disk which helps to focus sound to their asymmetrical ears while hunting. Patrick Bevier photo.

Mammoth Michiganders: GGOs are the largest owls in Michigan (by length). They are considered the largest owls in the world by that dimension. In the Wolverine State, however, great horned owls and snowy owls are a bit heavier, with larger talons to boot. GGOs can measure in length to 34 inches and tip the scales at up to four pounds. Their expansive wingspans can reach 60-inches and, like other owls, are proportionally broader for stealthy approaches with very little wing noise.

Purdy Birdies: Adult GGOs have a huge, rounded head with a grey face and yellow eyes rimmed with darker circles. The lighter “letter X” formation between the eyes gives them a wise and inquisitive effect. GGOs possess color blends that are simply stunning. Underneath, they are light with dark streaks, while the upper parts are grey with pale bars. GGOs do not sport ear tufts but do have the largest facial disks of any raptor. These dapper dudes have a fluffy white collar resembling a “bow tie” just below the beak. The long tail tapers to a rounded end. Females are usually up to 25% larger than their male counterparts.

A Wise Ole Owl: The oldest known GGO was almost 19 years old and lived in Alberta, Canada. The individual was banded in 1996 and was found in 2013, after unfortunately being hit by a car.

Rodent Raiders: GGOs are extremely beneficial animals because they are prolific predators of problem-causing organisms like mice, rats, moles, voles and chipmunks. Fortunately, a single adult GGO can devour up to seven rodents daily!

Say What? Like the barn owls and long-eared owls, GGOs have asymmetrical ear openings that help them find their prey by sound only. The left ear hole is higher on the head, which enables precise directional hearing and the shape of the face aids in focusing the sound. Remarkably, GGOs have been observed locating a vole two feet deep in the snow from a distance of 100 yards! Additionally, the angle at which they can cock their heads when listening for prey is remarkably 270 degrees.

Ice Breakers: These puff-balls of feathers only tip the scales at 4 pounds max, yet they are piercingly powerful when breaking through hard-packed snow to grab a rodent. One GGO reportedly busted through the snow crust that was strong enough to support a 175-pound human!

Global “Guys:” GGOs aren’t just North American avians. They also prowl the coniferous forests and tundras of Scandinavia, Russia, Mongolia, and Siberia. Additionally, they are the only Strix species found in the Eastern and Western Hemispheres.

Mating Matters: GGOs usually mate for life and don’t reach sexual maturity until age three. In the northern U.S., mating usually begins in March, and an average of four eggs are laid, which hatch in about 30 days. Clutch size is closely related to the abundance of prey in the area, however. The owlets are ravenous, and both parents spend most of their waking hours bringing food back to the nest. GGOs do not build their own nests but instead use the abandoned nests of eagles, hawks, ravens, and even those of gray squirrels. Fledging begins at about four weeks and the young can fend for themselves at about 3 months.

Sometimes Southerners: GGOs are one of 11 species of owls that inhabit Michigan at some time of the year. Some years very few, or no, GGOs show up in our state. When they do, it’s almost always in the Upper Peninsula and occasionally the northern Lower Peninsula. Ornithologists hypothesize that in years when they mosey south to Michigan is when rodent populations have crashed in Canada. These periods are known as irruptive years.

Parliament in Session: The name for a group of owls has many collective nouns, including a bazaar, glaring, stooping, wisdom, and parliament! Female owls are known as hens, while males are sometimes called cocos!

Means for Mortality: The greatest threat to GGOs is habitat destruction due to timber harvest, impacting all aspects of their living requirements. They are also affected by eating rodents that have been poisoned with rat killers, collisions with vehicles, and the West Nile Virus.

Fab Photos: In early March, I was fortunate to travel with fellow photographers to a unique ecosystem known as Sax-Zim Bog, north of Duluth, Minnesota. Because of its rare climate, vegetation, and resident rodent population, Sax-Zim harbors the largest GGO population in our region. Local bird experts estimate that there are up to 15 resident mating pairs of GGOs at Sax-Zim.

On one day, the owls were especially active and accommodating. They were hunting actively, moving from perch to perch, trying to get a better acoustic vantage point for listening for voles. One of the most remarkable experiences I’ve had outdoors was when a huge female GGO – gliding almost blimp-like – flew right over our heads and landed just 15 meters away on a road sign. To our delight, she remained there for several minutes despite the sounds of several shutters capturing her breathtaking beauty.

No Worries: Even though they are scarce in Michigan, on a worldwide scale GGOs are a least concern animal on the endangered species list.

Playing a Potter Part: Errol, the ancient owl that served the Weasley clan in the Harry Potter series, was a GGO!

Those are some wonderful words about those fantastic phantoms known as Great Gray Owls. With exceptional luck, I hope you happen across one in the woods and waters of the Wolverine State!n