Play some of Michigan’s very best, tips, tactics and strategies, plus a unique display of cribbage boards 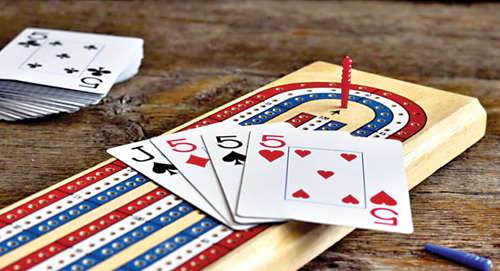 Cribbage is a traditional card game played in many deer camps throughout Michigan. Challenge nationally ranked cribbage players at the Outdoor Weekend, September 9,10 and 11.

So you think you’re a pretty good cribbage player, huh? Maybe you are. And then again maybe you’re not as good as you think.

New to the Woods-N-Water News Outdoor Weekend this fall is the “Cribbage Challenge.” You’ll get a chance to play some of the very best cribbage players in Michigan and the United States.

•David Aiken, editor of the monthly Cribbage World magazine. He has won twenty-one cribbage tournaments to date, and is rated Life Master One Star.

•Kathy Blough, has earned her Bronze Award in club play.

•Jeff Shimp, a charter member of the American Cribbage Congress. Jeff has won forty cribbage tournaments, is rated Life Master Three Stars, and was elected to the ACC’s Hall of Fame in 2001.

All four players are members of the American Cribbage Congress (ACC), the official governing body for competitive cribbage in the United States. Founded in 1980, the ACC is composed of three divisions: 200 local clubs around the country that play weekly, 150-plus weekend tournaments, and hundreds of online tournaments. Michigan boasts a dozen clubs weekly and eight tournaments annually. Learn more about the ACC at cribbage.org.

The players will offer tips, tactics, and strategies for one and all who would like to learn more about the game. They will also play one-on-one at four separate tables.

Of course it’s all just for fun. Each challenger will get a Certificate of Participation, signed by the person you played, win or lose.

The somewhat unusual game has been a favorite of mine for years. My family and friends play cribbage as often as we can, mostly during deer camp or up-north fishing trips.

So what is it about cribbage that makes it so much fun to play, and if you’ve never heard of it or tried it before, why should you make the effort to learn it?

Cribbage originated in England in the early 17th century, and is usually attributed to Sir John Suckling. Cribbage, or crib, is a card game, traditionally for two players, that involves playing and grouping cards in combinations which gain points. It can be adapted for three or four players.

Cribbage has several distinctive features: the cribbage board used for score-keeping, the eponymous crib, box, or kitty (in parts of Canada)—a separate hand counting for the dealer—two distinct scoring stages (the play and the show) and a unique scoring system including points for groups of cards that total fifteen. Tactical play varies, depending on which cards one’s opponent has played, how many cards in the remaining pack will help the hand one holds, and what one’s position on the board is. A game may be decided by only a few points—or even a single point—and the edge often goes to an experienced player who utilizes strategy, including calculating odds and making decisions based on the relative positions of players on the board.

The basic concept of the game revolves around building point-scoring card combinations, and the goal is to be the first player to reach 121 points on the score-board, which players keep track of with pegs. Games are played in a series of hands, in which players are dealt six cards, and they must set aside two of these six to a “crib” which will later score points for the dealer.

You play cards in turns, and add their values together (court cards count as ten points) until you reach or near 31, and then this process is repeated. During this process you score points for combinations like cards that add to 15, pairs and triples, and runs (in the show phase you also score points for flushes).

Ummm…got it? It takes some time to learn.

Make time to visit and play our cribbage champions or challenge them to a game during the 36th Woods-N-Water News Outdoor Weekend at the Eastern Michigan State Fairgrounds in Imlay City. Hours for the show are 3 p.m. to 9 p.m. on Friday, September 9th, 9 a.m. to 7 p.m. on Saturday the 10th and 9 a.m. to 5 p.m. on Sunday the 11th.