While eating lunch one day at work, my friend Gary asked, “You interested in buying a 28 gauge shotgun? It was my dad’s and I want to sell it.” I didn’t have to think very long about it. I’d never owned a 28 gauge. Never even shot one. “How much you want for it?” I asked.

He threw out what I thought was probably a low enough price, so I said, “Sure, I’ll take it.”

As a young man, I had hired into the Dow Chemical Company with a group of new employees of about the same age. Of course we were immediately put on rotating shift work, but we were young, tough, and felt like we were making good money. We agreed among ourselves to “trade shifts” with each other when needed to allow someone to attend a family function or a kid’s sports game. That made shift work more bearable. It also made it harder because you had to work 16 hours straight when you took someone’s shift. Did I mention that we were tough? 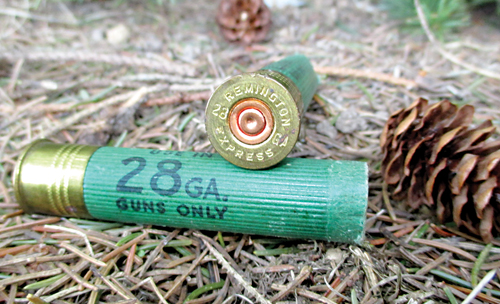 Around work, we did a lot of talking about hunting, fishing, and other outdoor activities. Some of my co-workers became good friends and we hunted and fished together when our days off coincided. Gary was an especially cherished friend of mine, and we spent many enjoyable days together in the outdoors. I guess I became known as a hunter and a guy who enjoyed guns. I was even known to buy or sell a gun now and then.

On the day that the “gun deal” with Gary was to take place, I was working the afternoon shift for a co-worker, so I would be going home at midnight and doubling back at 7:00 a.m. for the day shift, with just a few hours of sleep. Gary was coming in on the midnight shift. We met in the parking lot, where he handed me a padded gun case, and I handed him the money.

On the drive home, I wondered about the shotgun I had just bought. Was it a single shot? The case seemed heavy; maybe it was a nice double barrel. Fancy checkering? Engraved? A side-by-side 28 gauge would be a great gun for grouse hunting. I knew that Gary’s dad had recently passed away, but I didn’t know what kind of relationship he had with his dad. I wondered why he was in such a hurry to sell the gun.

My thoughts turned to my dad. We had hunted and fished together as far back as my memory went. As a little boy, I was allowed to tag along behind him on the opening day of pheasant season until the first rooster was taken. Then Dad “let” me carry it back to the house. Although I struggled and my little legs tangled in the weeds, I proudly carried the heavy bird home. Possibly it was Dad’s way of getting rid of me so he could hunt, but I’ll bet he watched me all the way until I was safely home.

Back then, you had to be 12 years old to hunt small game; 14 to hunt deer. I walked along and played “dog” for years anxiously waiting to be old enough to actually hunt. Dad bought my first shotgun for me when I was 11 years old, a used Harrington & Richardson 16 gauge single shot. I still have that gun.

When I was old enough to hunt small game, Dad and I started the fall season with grouse hunting because it opened on October 1, and pheasant season didn’t open until October 20. Dad always called them “pats,” short for partridge, I guess. I had trouble hitting them. In fact, I still do. I remember my first grouse. At my shot, it rolled to the left and went down into the brush and dried ferns. We didn’t have a dog and we couldn’t find it. We circled in the area of a single feather which had caught on a bush. Dad wouldn’t give up and he finally found it for me. I haven’t forgotten it, Dad. It was my first game bird.

When I was old enough to hunt deer, Dad took me up north, where we hunted the big woods. I learned to navigate the woods on my own because we would split up to still hunt and meet at the car later. It seems strange that after nearly 60 years, I can still remember every small detail of missing the first three bucks I saw because of my inexperience. Help from Dad was really appreciated when I finally did get my first buck. I dressed him out and tried to drag him but didn’t get very far. Even gutted out, he weighed more than I did. To my embarrassment, when I brought Dad back to help me drag him out, I couldn’t find where I had left the deer. We both searched around the area until Dad whistled.

“Here’s the gut pile. Where’s the deer?” he asked with a grin. It wasn’t far away. Without Dad, I might have never found him, though. I had a lot to learn. Dad was always there for me.

Of the ten commandments that God gave Moses on Mount Sinai, number five is “Honor your father and your mother.” (Exodus 20:12) And I do. By the time I arrived home from work that night, I had decided one thing for sure. If this was my dad’s gun, I wouldn’t sell it.

When I entered the house the phone was ringing. (Yes, it was attached to the wall.) It was Gary. “I’m glad I caught you,” he said, sounding relieved. “I’ve been thinking. I know I sold you Dad’s gun, and you can hold me to the deal if you want to. But…I’d like to keep it.”

In the morning, we met in the parking lot at work again. He handed my money back and I handed him the gun case. I’d never even opened it. He sold me the gun at the beginning of his shift and bought it back at the end of his shift.

Gary and I spent many days hunting and fishing together after that. I don’t remember the 28 gauge ever being mentioned again. Eventually, circumstances of life caused us to drift apart. I haven’t seen him in many years, but I will always count him as a valued friend. If we ever get together again, I’m sure we will pick up the conversation right where we left off because old friends are not forgotten, and therefore we are never really apart.