My first trip to the famed Stannard Rock in Lake Superior was a success and also a failure. Our television crew booked a charter and quickly discovered that Stannard Rock is a special place. Not only does this chunk of mid-lake structure produce numbers of fish, it routinely coughs up giants.

That first trip focused on deep water jigging tactics. Many of the fish we found and caught came out of nearly 200 feet of water! Live-releasing those fish proved nearly impossible. 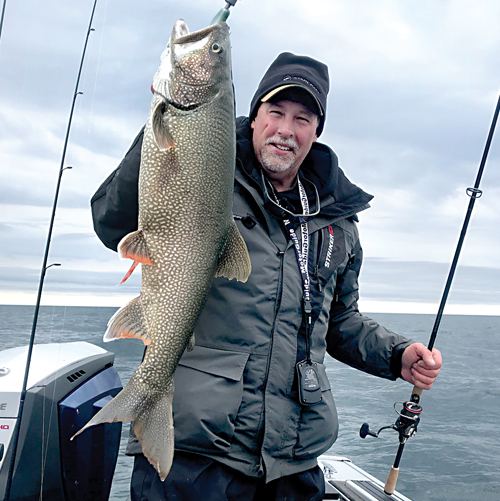 The author has been blessed to have caught a lot of trophy class lake trout in his career. For the angler who wants to jig or cast for monster lake trout, Stannard Rock continues to be the place where dreams are made.

I’m still haunted by the trout we caught and kept that day. You see, lake trout are one of the slowest growing and oldest living fish in the Great Lakes. In Lake Superior, adult lake trout reach sexual maturity around eight years of age. Lake trout average about three inches of growth per year until they reach the 30-inch range, then growth rates decline to about 1/2 inch per year for the rest of their life!

Stannard Rock is named after Captain Charles C. Stannard, who discovered this reef complex in 1835 while aboard the John Jacob Astor. The lighthouse that stands on that location now was first lit in 1883. The concrete crib that the lighthouse sits on rests in about 10 feet of water. In the early years, Stannard Rock Lighthouse was manned by Coast Guard personnel. These days, the lighthouse is not manned; instead, an automated light guides Great Lakes shipping and adventure-seeking anglers.

Located approximately 40 miles off shore from Lac La Belle in the Keweenaw Peninsula of Michigan’s Upper Peninsula, anglers also access Stannard Rock from Marquette. The Stannard Rock reef is approximately one mile wide and about five miles long. While this may seem like a lot of prime trout habitat, only a small portion of the reef features shallow water.

A number of the anglers who have fished Stannard Rock many times over the years are concerned that this remote fishery is getting too much fishing pressure. Historically, Stannard Rock was fished by a handful of charter boats. Drifting while jigging was the most common way lake trout were targeted.

Even with the help of drift socks, larger charter boats routinely drift too fast to easily maintain contact with the bottom. To combat this problem, captains routinely outfit their clients with large jigs in the 2 to 3-ounce range or use larger jigging spoons such as the Swedish Pimple.

The advent of seaworthy and well-powered multi-species boats has changed the face of Stannard Rock. In a 20 to 22-foot “walleye” boat, it’s possible to reach Stannard Rock in a little over an hour. Boats equipped with modern electronics, mapping units and auto-pilot style electric motors can easily find structure, locate fish and then hover precisely over these fish.

Compared to a boat drifting aimlessly over the structure, an angler in a multi-species boat can literally spot and catch individual fish with regularity. Collectively, boats outfitted with this kind of technology are becoming commonplace, and the number of anglers willing to make the run to Stannard Rock grows every year.

The fact that lake trout grow so slowly and modern fishing methods are significantly more effective suggest that special conservation efforts may be needed to protect this delicate fishery. Currently, anglers are allowed to catch and keep three lake trout daily with a possession limit of five lake trout in the MI-4 Lake Trout Management Region that encompasses Stannard Rock. Only one trout per day may be 34 inches or greater in length.

While these daily and possession limits may seem conservative to some, it’s important to note that fishing pressure at Stannard Rock was once considered exceptionally light. As Stannard Rock has become more popular and accessible, significant increases in angling pressure are taking place on what amounts to a tiny piece of aquatic real estate.

A growing number of forward-thinking anglers are opting to practice voluntary catch and release at Stannard Rock. Anglers who opt to keep only badly injured fish or trophy class fish are helping to sustain a thriving fishery at Stannard Rock.

To effectively catch and release lake trout requires an intimate knowledge of handling fish. For trout to be released, it’s best to keep the fish in the landing net and in the water. Unhook the fish using needle nose pliers to avoid handling the fish as much as possible. Release the fish as quickly as possible.

When photographing fish, keep the fish in the landing net and in the water until the camera is ready. Take a couple of quick pictures and return the fish to the landing net immediately so the fish can fully recover before being released.

Using barbless hooks and single hooks is a great way to quickly land and release lake trout. Current regulations on Lake Superior do not require barbless hooks, but the practice has proven to be highly effective among anglers who prefer to live-release fish.

If you are fortunate enough to arrive at Stannard Rock before the sun hits the eastern horizon, you may be treated to surface-feeding trout. Because the waters of Lake Superior remain cold even in the heat of summer, lake trout often cruise the reef near the lighthouse early in the day. It’s common to see trout feeding on the surface, and it’s possible to catch these fish casting spoons and in-line spinners.

About the time the sun hits the horizon, the lakers of Stannard Rock start to slide off into deeper water. One of the most effective ways to target these fish is to cruise around quietly using sonar and an electric motor to spot individual fish.

It’s common to mark an individual fish, drop down a jig and hook that fish. In early to mid-morning, lake trout are routinely found in 30 to 100 feet of water. One-ounce jigs tipped with soft plastics or bucktail jigs work nicely for shallow water jigging applications so long as the boat is equipped with an auto-pilot GPS controlled electric motor.

While Stannard Rock is famous for producing big fish, most fish caught jigging will be 3 to 5 pounds. Of course, bigger fish in the 10 to 15-pound range are regularly caught, along with the occasional fish topping the 20-pound mark.

An increasingly popular tactic for targeting larger-size trout is known as jig casting. Using 1 to 3-ounce jigs (depending on water depth), make a long cast and let the jig sink to the bottom. Using a slow retrieve, work the jig back to the boat.

Larger paddle and twister tail style plastics produce the best when jig casting. Using six, eight, 10 and even 12-inch plastics help to target a larger average size fish. Casting these large jigs and plastic offerings is a job for a heavy action baitcasting rod/reel. Some of the best outfits for targeting trophy lake trout include bass flippin’ sticks, swimbait rods and rods designed for fishing umbrella or Alabama rigs.

A baitcasting reel loaded with 30 to 50-pound test super braid provides the power to tire out big fish quickly. While lighter action rods can land big lake trout, doing so requires a long fight and increases the odds that landed fish will not be able to be released.

Because using live or preserved minnows tends to produce deeply hooked fish, a better alternative is to employ natural fish scents as an attractor. The lake trout of Stannard Rock feed primarily on ciscoes or what many anglers refer to as lake herring.

Pro Cure Bait Scents out of Salem, Oregon, produces the Super Gel series of natural scent products. Super Gel is made by dehydrating and grinding natural forage species, then combining a stabilizing agent with a sticky emulsion that helps create a strong and long-lasting natural scent stream in the water.

Super Gel is produced in a host of different formulas that feature natural forage species found in the Great Lakes, including herring or ciscoes. A dab of Super Gel, about the size of a dime, applied to soft plastics is enough to create a natural scent stream that lasts 30 to 40 minutes.

If making the run to Stannard Rock is a little too scary, booking a charter is an excellent option. Captain Travis White of Keweenaw Charter Fishing Company (keweenawcharters.com) has spent as much time on Stannard Rock as anyone. His knowledge of the fishery and determination to preserve this resource puts him in a class all by himself.

Stannard Rock is one of those iconic places that anyone who appreciates lake trout needs to visit. Not only does this unique fishery produce numbers, but the chances of landing a personal best are also exceptional. Thanks to those who practice catch and release, Stannard Rock may well produce another state record sometime soon.