If your goal is to locate and harvest a mature buck with impressive headgear, the time to scout is now. Don’t make the common mistake of searching for the buck of a lifetime during hunting season. Here’s why.

Mature bucks are very difficult to scout and pattern once late summer break-up occurs. Sure, you need to get your trail cameras out there, but the narrow window of opportunity to catch wary bucks off guard, standing in the open during broad daylight only occurs during summer when they are in velvet. Summer bucks are often in bachelor groups, and with their testosterone levels at an all-time low, they gather together and feed in open areas. 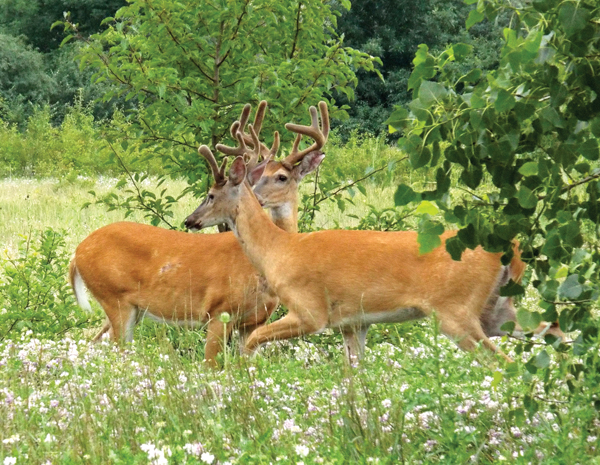 Keep in mind my hotspots are in southern Michigan, where big bucks outnumber the stragglers found up north. Michigan’s rich agricultural regions not only support record numbers, but big bucks have plenty of agricultural crops to enhance antler growth, mild winters, less predators and much more. Perhaps the most important variable for big buck survival in southern Michigan is private property that is not over-hunted, like upper Michigan state and federal land.

Last year my summer scouting produced record deer sightings in mid-Michigan counties of Gratiot, Ionia, Clinton and Shiawassee. My top southern Michigan counties were Calhoun, Jackson, Washtenaw, Monroe and Berrien. One outing in Clinton County served up 83 bucks, mostly young deer, but some 3-4-year-old beasts had impressive mossy horned headgear. Several treks culminated in BOOM! We spotted a huge buck with outstanding tine height, monster mass and huge body. Scott Goldammer joined me, and he was shell-shocked to see such a large animal less than a mile from where we hunt on state land.

The monster was with several other bucks, and we spotted the huge rack just as low light made telephoto photography almost impossible. We made several more trips and tried to get quality pictures of the trophy, but each time the big boy would show up in the open field under extremely low light conditions.

I was so impressed with the monster I posted his photo on Facebook and announced he would be a new state record. However, after long hours of scouting, I got a detailed look at his rack through my 10×50 Nikon binoculars and discovered he sported at least 12 points, including a curled brow tine that extended down over his left eye and unfortunately, his left side had two main beams, making him non-typical. Unfortunately, he is not state record material.

I knocked on doors for hunting permission on the monster’s home turf and got shot down. However, to sweeten the pie less than three miles away, Scott spotted an extra-large bachelor group of 22 bucks in a hay field. The farmer granted permission for photography and hunting. Scouting revealed one of the largest deer I’ve seen ever, bucks galore, and on the gun opener, I shot a dandy buck from the same alfalfa field he was in during summer. My point is summer scouting can help you identify bucks in your hunting area and help you score on a bruiser come fall hunting season.

After years of whitetail photography and summer scouting, I’ve found the hottest time begins in July and lasts until late August. One trick is to seek harvest records from CBM Commemorative Bucks of Michigan that will list record bucks entered in each county. For instance, in 2021, 28 bucks were entered for Ionia County, while only 14 were entered for all counties in the Upper Peninsula. Once you learn where big bucks are plentiful, you zero in on specific counties and spend summer evenings scouting from roads and highways with binoculars in hand. CBM records can be found at www.michiganbiggamerecords.com.

I can’t say enough about the importance of quality binoculars for effective buck identification. You would be surprised how well a mossy horned velvet crown is camouflaged by field grass, standing corn and underbrush. Also, keep in mind mature bucks are very smart and seldom venture near public roads. Look for them in field depressions, low lands bordered by thick cover, along fencerows, standing in deep grasses and more.

I mentioned bachelor groups, and it is my opinion after countless hours photographing and observing whitetail bucks during summer, big bucks draw a crowd. I mean, in summer, small bucks tend to join big bucks and they follow their daily pattern, learn the big buck’s domain, learn how to respond to automobiles, trucks, motorcycles and farm equipment. Also, during summer, rival mature bucks are attracted to each other and are frequently seen together. I’m convinced the boss buck lays down a scent pattern other bucks tend to follow. It is my opinion smaller bucks are drawn to a mature buck’s domain like bees to honey.

I’m convinced by July 4, you can count on bucks funneling into a specific area dominated by a boss buck with impressive headgear. The exact location shifts yearly with crop location, availability of prime food sources and more. If a boss buck is harvested the following year, the bachelor group will be found in a new location where an adult buck has survived. The pooling of bucks in summer is a scouting pattern most hunters overlook.

But if you come with me in July and early August, I’ll show you truckloads of bucks, and by buck break up in September, I’ve got intelligence regarding big buck hotspots. My goal is to find them, capture their image on film, knock on doors, get hunting permission long before hunting season and come opener, I’m sitting on the home turf of a monster, guaranteed.

Locating 150-class bucks in Michigan is a daunting task, but summer is when seeing your dream can come true. But you have to scout them. My scouting strategy is driving country roads and checking fields deer prefer. Keep in mind the really big mature bucks seldom venture into open areas during broad daylight, but once the setting sun touches the horizon, they are moving. Low light conditions and big bucks go together.

If I had to pick the ideal crop to attract mature deer, it would be alfalfa, hands down, although in recent years, some soybean fields draw deer for miles. In wooded locations, look for deer in grassy openings. The drawing power of sweet alfalfa brings bucks like kids to a candy store and the first-year planting often produces the sweetest plant that brings bucks on a string. I hope you scout alfalfa fields this summer in your area and don’t overlook the drawing power of soybeans and tall grasses. As summer shifts into fall, bucks will move to new food sources and come late August, bucks will suddenly disappear. Here’s why.

I applied my big buck scouting strategy to northern Minnesota and located more huge 10 points than you can imagine. But come early September, deer vacated the open fields, even does and fawns. I was perplexed, but one day when going fishing, I was parking the boat trailer when suddenly there was a loud clunk on the top of my van. Further inspection found huge white acorns dropping from oak trees nearby. A light went off in my mind and after some searching found acorns were dropping everywhere. What I discovered is when white oaks drop in late summer the bucks shift feeding patterns from open fields to oak ridges covered with acorns.

Come the dog days of summer deer often congregate in areas with water sources. Bucks love to play in the water, just like kids at a public swimming pool. Look for them to drink, swim, and frolic in local lakes, ponds, streams, rivers, ditches and marshes. I’ll never forget the mega-bucks I harvested in the Shiawassee Federal Refuge that had extra long hoofs, curled upward from constantly wading in cattail marshes, swimming rivers and hiding in flooded low lands. Bucks love water.

Here are some important tips to help you scout, locate and identify big summer bucks. Bruisers take on a bright reddish color in summer and they are somewhat darker in color than a small buck or does. Of course, size is a good identifying characteristic, big bucks look larger than the rest of the herd. Summer bucks love to hang out along fence rows or edges of wood lots and they like to spend time under overhanging branches where they can brush antlers and scrape the ground.

If you see deer crossing a field, take a good look at the large deer leading the group, it is likely the big boy. Mature bucks get respect from the entire population and if you see a deer crossing a field that is larger than the rest and other deer get out of its path, you can bet it’s Mr. Big. Frequently, if deer are feeding in the open but keep looking back at the woods, it is a good bet the mature bucks are coming. Always check the front deer if you see a group walking single file; mature bucks lead the pack in summer. Due to mismanagement, Michigan’s deer herd is over-hunted, over-harvested and older bucks survive by being sneaky, reclusive, always on guard for hunters. Summer is the only period when they let their guard down but don’t expect 160-class bucks to stand on the top of a hill in an open field during broad daylight. But when summer sun is setting, and dark shadows cover openings, bucks will slowly slip into the open. Savvy old bucks will seek cover at the slightest sound of approaching vehicles, and scouting can be best when a breeze covers your vehicle’s sound.

The biggest problem with scoring on a mature buck in Michigan is numbers are very few. Antler restrictions are a good management tool to help bucks get older, but the DNR has a long way to go in using management tools that help big buck numbers to increase. That’s why savvy private land owners have taken matters into their own hands by limiting buck harvest, planting food plots to feed and draw bucks to specific hunting areas. Many have learned buck numbers skyrocket by feeding year-round.

So, get your trail cameras out immediately and scout during summer to gain intelligence about bucks on your hunting turf. If you can locate the buck of your dreams now, it can greatly increase your odds of scoring come hunting season. Sometimes you need to get hunting permission on new property, but as a general rule, once you see that buck of a lifetime, you will increase hunting effort, spend many more hours on stand and eventually score. 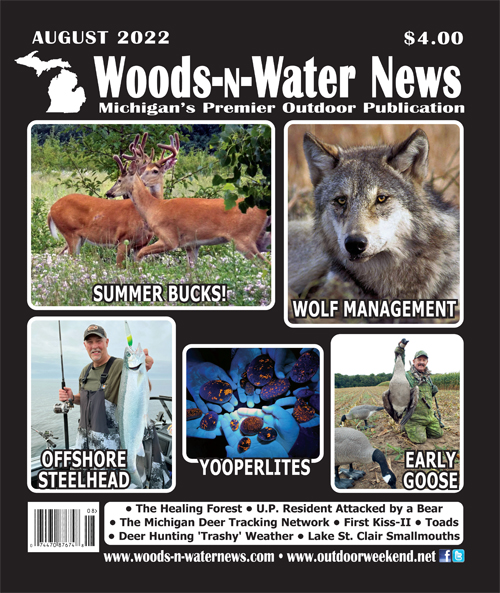 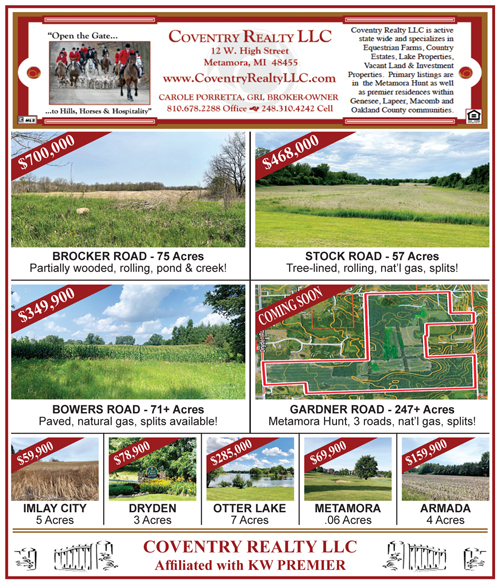 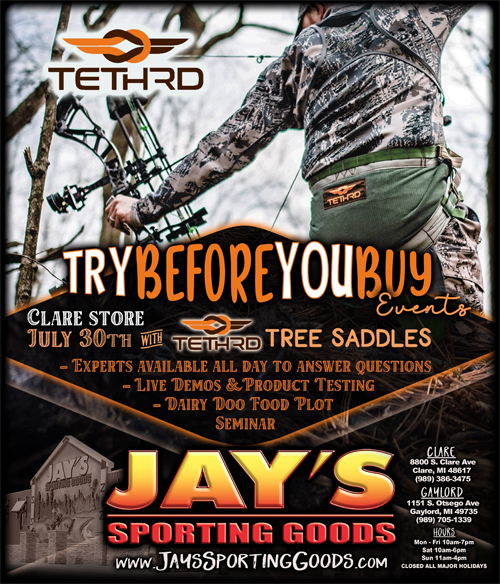