One of Michigan’s most massive mammals are those unbelievably brawny, beautiful and berry-loving black bears. Hold on firmly for a few fun facts about these abundant, animated and awe-inspiring animals: 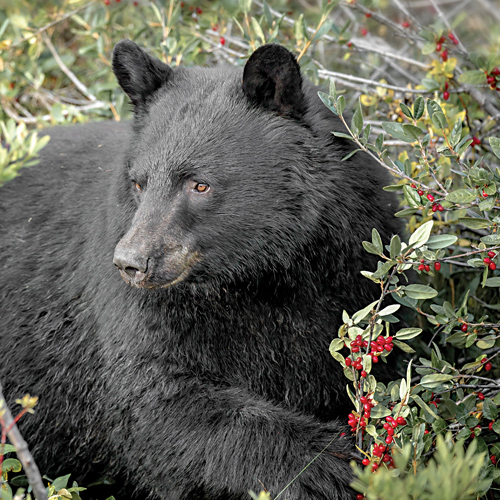 Distribution Data: Believe it or not, black bears have been reported in every Michigan County. However, the vast majority – close to 90% – of all Michigan black bears reside above the Mighty Mac in the U.P. Most of the other 10% hang out in the northern Lower Peninsula. The Michigan DNR reckons we have about 12,000 black bears in our state. By comparison, the state that boasts the most black bears is California, with an estimated 40,000.

Smallest Species: American black bears are the smallest bears of the three found in the Western Hemisphere (brown bears and polar bears being the other two). But their mass is nothing to take lightly, as full-grown black bears in Michigan average 200 and 300 pounds for females and males, respectively. The largest black bear recorded in the Mitten State was a mind-blowing 650 pounds for an animal from the northern Lower Peninsula. Other max dimensions for these bountiful behemoths are over five feet in length, 4 1/2 feet high on all fours, and seven-feet tall when standing upright!

Brawny Bruins: Additionally, a black bear’s head can stretch the tape up to 13- inches long and some sport mammoth paws, which can measure up to 10-inches in length!

Stable Situations: The IUCN lists the American black bear as a Least Concern Species due to its wide range and population numbers that are twice that of all other bear species combined. Along with the brown bears, they are one of only two bear species not considered to be globally threatened. That doesn’t mean they’re totally “out of the woods,” as habitat destruction and poisons continue to take a toll on some black bear populations.

Oswald’s: If you’re traveling in the U.P. and want to support a great cause while getting close to black bears, visit Oswald’s Bear Ranch in Newberry (oswaldsbearranch.com: 906-293-3147). Owner Dean Oswald summarized what they do:

“We only take in and save orphaned or injured black bears and raise them here at the ranch. We have 42 bears currently – of which we bottle-fed 39 – from all over the U.S. For example, we’ve had cubs from Wyoming, Ohio and New York. They were all rescued cubs whose mothers were killed by cars, poachers, logging or neglectful owners. We provide bears with great natural habitats on 180 acres of land that can be viewed by visitors from raised platforms.” Kudos to him and his team, their rescues included bottle feeding five orphaned cubs this year alone! They’ve been saving black bears since 1984 and have earned 5-star ratings from several conservation societies. Oswald gives back, too, by having free school tours and free admission for active military, among other altruistic gestures.

Brunettes/Blondes: Despite the name, American black bears have genetic variations in fur color, including brown, cinnamon, or even blonde, on occasion. The vast majority, however, are dark brown/black in hue. The black fur is advantageous for heat retention during the colder, active months and while they’re denned-up when Old Man Winter comes a calling in the Great Lakes State.

State Symbols: American black bears are the official mammals of four states: Alabama, Louisiana, New Mexico and West Virginia. Their cousins, the grizzly bears, have that distinction in Montana and California (on whose flag a golden grizzly predominates).

Hardly Hibernation: Although the term is widely used, physiologically, bears are not true hibernators. That’s because their body temperatures only dip by a few degrees, whereas hibernating animals’ internal temperature, heart rate and breathing drop to very low levels. Bears instead fall into a deep sleep known as torpor. During torpor, bears can slumber for more than 100 days without eating, drinking or passing waste. Remarkably, their bodies can reabsorb urine and turn it into critical proteins through a urea recycling process. Female bears also wake up to give birth during torpor and then fall back to sleep as their little ones nurse and nod off themselves. In Michigan, bears typically enter their den by December and emerge in late March or April after a long winter’s nap.

Sleeping Bear Story: One of our most prized geological formations, the Sleeping Bear Dunes, gets its name from a Chippewa legend beautifully captured in Ann Arbor-based Sleeping Bear Press’s children’s book, “The Legend of Sleeping Bear.” The native story tells of a mother bear and her two cubs fleeing a fire on the Wisconsin shoreline, swimming across Lake Michigan. The cubs didn’t quite make it and are immortalized as the North and South Manitou Islands. Mother bear, who longed for her cubs, lay down to forever watch for them. She was covered with sand by the Great Spirit Manitou, forming the famous dunes on the lakeshore.

Awesome Adaptations: Black bears are well suited to live in the forest. They are superb climbers; have an acute sense of smell that’s 100 times better than humans; large claws for digging, climbing and defense; good eyesight; and powerful jaws and canine teeth.

Long Lifespans: Black bears live on average from 18-23 years in the wild. Some top that, and the record lifespan was a female (Bear Number 56) in northern Minnesota who died in 2013 at the amazing age of 39 1/2!

Honey Lover’s History: The popular fictional character, Winnie the Pooh, was named after a black bear from the London Zoo in the early 20th century known as “Winnipeg.”

Nifty Names: Male black bears are called “boars” while the females are dubbed “sows.” And you don’t have to be a Wrigley Field baseball fan to know the young are called “cubs.” Bears are solitary animals other than during mating season or when a mother cares for her young. However, much to Sherlock’s delight, when in a group, bears are referred to as a “sleuth.”

Not So Terrible Teddy: The origin of the most popular stuffed animal ever, the Teddy Bear, occurred in 1902. A Brooklyn candy shop owner and stuffed animal maker saw a political cartoon depicting president Theodore Roosevelt refusing to shoot a black bear that had been tied up. This inspired the shop owner to create a stuffed toy, initially named “Teddy’s Bear,” and, with the president’s permission, mass-produced the wildly popular bears in his factory called the Ideal Toy Company.

Surprising Speed: Like the best NFL defensive linemen, black bears are extraordinarily fast for their size. They can attain a sizzling speed of up to 35 mph and sustain near max velocity for long distances. Yes, the claim that they could outrun a race horse, or any dog, is completely true. They could even leave world-record sprinter Usain Bolt in the dust in the 100-meter dash! So, you’ll never outrun one and forget about climbing a tree, too. According to the U.S. National Park Service, the best thing to do if you come face-to-face with a bear (once you’ve checked your undershorts) is to slowly and calmly speak to the bear, wave your hands above your head, so they know you’re “different” from typical prey items and back away slowly. However, if the bear does attack, they say, “Fight back with anything you can grab and everything that you have!”

No Messin’ with Momma: The comparison of some human mothers being like a “momma bear” is quite apropos when it comes to the actual animals it describes. I’m hoping that all who read this are aware to never approach a bear too closely, especially during the spring and summer when an adult bear is likely to be a mother with cubs. The vast majority of black bear attacks – which average only one fatality per year in the U.S. – are during times when a mother bear was simply defending her young from foolish hikers, campers, photographers, sight-seers and the like. Interestingly, a three-year study of black bear attacks in the U.S. found that over half of them were initiated by an off-leash dog whose owners were then injured trying to protect the dog.

Bringing Up Baby: In Michigan, black bears mate in the summer from late May through early August. Females leave scent trails around their territory, signaling to males of their receptiveness. The pair may stay together for a little over a week but then go their separate ways. In one of the most unusual embryological processes, known as delayed fertilization, female black bear eggs float freely around in their uterus before implanting in the uterine wall, usually in November. The cubs are born in January or February while the female is in torpor. They have been known to have up to six cubs, but two little ones are most common. Newborns are quite helpless and start blind, toothless, blue-eyed and weigh only a pound.

Bear Bites: Black bears are omnivorous and opportunistic feeders and treat our state’s forests like a Golden Corral buffet! Eating mostly at night, they are seasonal feeders with wetland plants predominating in spring, berries of all kinds in the summer, hard mast from trees in the fall, and meat throughout the active season. Most animal matter consumed by bears includes colonial insects, larvae, and medium-sized animals like mice, squirrels, woodchucks, fish, and reptiles. When available, bears also feed on carrion. Additionally, they enjoy human-related foods, including agricultural crops, orchards, apiaries, bird feed and garbage. In preparation for winter torpor, bears gorge heavily in the fall and can gain as much as two pounds per day!

Native Nemeses: Native Americans generally consider the American black bear reverently as a creation of the benevolent Great Spirit. In contrast, they view the grizzly bear as its antithesis, a creature associated with the malevolent Evil Spirit.

Constellations: Bears play key roles in our fascination with celestial bodies by being central to the well-known constellations Ursa Major (known to some as “The Bear,” but also called “The Big Dipper”) and Ursa Minor (aka “The Little Dipper”). Interestingly, “The Bear” constellation was mentioned in both the Old Testament and Homer’s Iliad!

Those are some bite-sized, but not unbearable, blurbs about black bears. With any luck, you’ll encounter one, but from a distance, in the wonderful woods of the Wolverine State!