Great Lakes anglers are surprised when they set the hook and find they’re attached to a sheepshead. Freshwater drum can be found across the Great Lakes and in the larger tributaries. They are regular catch by anglers targeting other species. Most are disappointed when they discover they’ve caught a sheepshead, but they surely are not disappointed with the fight. Almost all sheepsheads are unceremoniously tossed back overboard, but there’s evidence that you might want to reconsider.

The bite was an almost imperceptible tick, but when I set the hook, I knew it wasn’t a walleye. The rod tip plunged toward the surface of the water, and even though the drag was set so tight I could hardly pull line off the reel by hand, the fish peeled line off the spool. The fish was powerful and bulldogged for the bottom. It was all I could do to hold on to the rod. If I didn’t know better, I would have thought I had a world-record smallmouth or a permit, but the scene had been repeated more than two dozen times that morning. I was quite sure it was another giant freshwater drum or sheepshead. The drum was incredibly strong, and it took all I could muster to winch the fish off the bottom before it would dive for the bottom again. This happened several times before we could get a net under the fish. Many were as big as a trash can lid.

One reason to target freshwater drum is they’re plentiful. On a recent trip for river walleye, we caught three or four drum for every walleye. It would have been a much less satisfying day had we not caught all the sheepshead between walleyes. We had an exceptional day for walleye too, but most of the other guides weren’t as lucky. I’m sure they were happy about at least catching drum for their clients/students during the fishing school we were participating in. 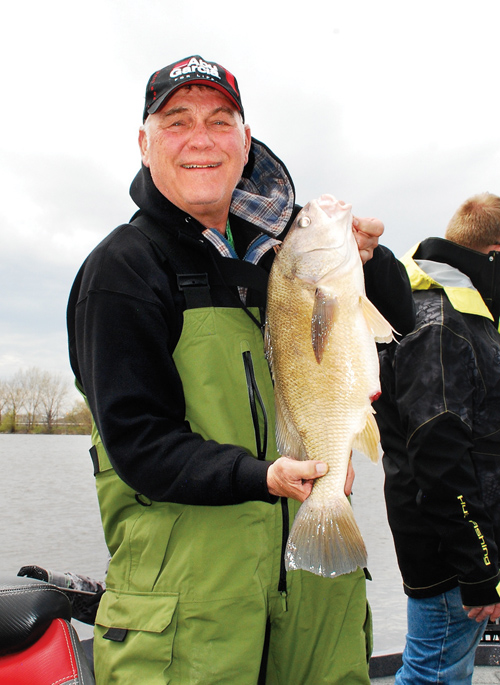 The author caught this sheepshead while jigging for walleye. Freshwater drum put up a very good battle that rivals most game fish and if filleted and cooked correctly can be tasty too.

Sheepsheads don’t take a day off either. They bite almost all the time regardless of the season, even when other species turn off during the summer doldrums. Plus, they get to trophy proportions. Some of the drum we caught were pushing 20 pounds. On light spinning tackle they give you one heck of a tussle. Freshwater drum topping 40 pounds are possible.

Sheepsheads are not real picky about what they eat. This particular day we were catching them on standard spring walleye fare – a lead-head jig with a plastic tail and a stinger hook. Many times the drum would have the stringer hook down their throats. The color didn’t seem to matter to the drum. Although a stinger hook was necessary to hook the light-biting walleye, it wasn’t necessary to hook the drum. Most of them inhaled our jigs. Drum can also be caught on live bait, spinners, spoons, crankbaits and just about anything else you want to throw. Drum have relatively small mouths for the size of the fish, so if you’re targeting them, you might want to use a smaller hook than you would for similarly-sized game fish.

Freshwater drum are one of the country’s most widely distributed freshwater fish. There’s a good chance that drum can be caught in a body of water close to where you live. Drum have the greatest latitudinal range of any North American freshwater fish, ranging from Lake Winnipeg in northern Manitoba, Canada, south through the U.S. and Mexico to Guatemala. They are most common within the Mississippi River basin, but can be caught in at least 27 states, from Montana, Nebraska and Texas in the west to Vermont, Virginia and Georgia in the east.

Sheepsheads are looked down upon because they are associated with other rough fish like carp and suckers. The vast majority are released because they are believed to be very bony and hard to clean. Nothing could be further from the truth.

Sheepshead lack the small y-bones that can be found in suckers and pike, and you can fillet them like any other fish. You do need to take care to eliminate all the dark meat along the lateral line that has a particularly strong “fish” flavor. If you do that, you’ll be rewarded with firm, delicately flavored flesh that many compare to saltwater redfish, which are related to freshwater drum. It helps to put the sheepshead immediately on ice, so the meat stays firm. Sheepsheads can be grilled, broiled, baked, fried, smoked or used in hearty chowder.

Friend Keith Sutton swears by his Mock Crab dish that uses freshwater drum. Boil enough water to cover the fish and season the water with shrimp or crab boil seasoning. Cut the drum into serving-sized strips or chunks and drop the fish into the boiling water. Cook for 3 to 5 minutes, remove the pot from the heat and let the fish rest for 15 minutes to soak up the seasonings. Drain, serve hot with melted butter or chill and serve with cocktail sauce like shrimp.

Freshwater drum have bony cartilage in their heads that is used to make a drumming noise, hence their name. Apparently, the male sheepshead makes a drumming noise to attract prospective females, kind of like a drumming ruffed grouse. If it’s extremely quiet, it’s been said you can actually hear the drumming sound.

Next time you’re on the water and catch a sheepshead or freshwater drum, consider slipping it into the live well when no one is looking. You may find you appreciate (b)eating a different drum.