With certain duck and goose hunting seasons starting Sept. 1 throughout the state and others to follow this fall and winter, the MDNR asks all hunters to be observant and careful when harvesting and handling wild birds due to the presence of the highly pathogenic avian influenza virus.

Although the rate of positive HPAI detections has slowed this summer, a recent uptick in reports of wild bird die-offs, neurologically abnormal wild birds and HPAI detections has prompted the DNR to issue additional guidance. Influenza experts expect a resurgence of this “bird flu” as waterfowl migrations get underway and fall hunting seasons begin.

The H5N1 virus continues to be detected through wild bird surveillance activities and is considered widespread in wild bird populations throughout Michigan, including all watersheds in both the Upper and Lower peninsulas. Dabbling ducks are the most commonly infected waterfowl, but geese, swans, shorebirds and other species also can be infected.

“As Michigan waterfowl hunters get out in the fields and marshes this season, we want them to know there is a lot they can do both to help prevent the spread of highly pathogenic avian influenza and to keep themselves, others and our bird and wildlife populations safe,” she said. 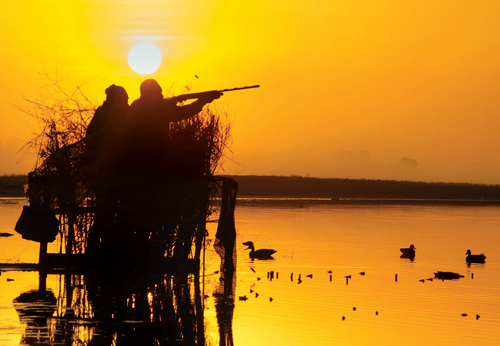 In late 2021, a Eurasian strain of the HPAI virus was introduced into North America, and HPAI cases have now been confirmed in domestic birds, wild birds and wild mammals throughout most of the United States and Canada. Michigan’s initial HPAI detection in a wild bird occurred on March 15, 2022. Since then, our state has had approximately 150 positive detections in wild birds and mammals.

Highly pathogenic avian influenza is highly contagious, and poultry are especially vulnerable. The strain of HPAI now present in North America has caused extensive morbidity (illnesses) and mortality (death) events in various wild bird species. In particular, waterfowl, raptors and avian scavengers such as vultures, gulls and terns have been affected.

Making the situation more challenging, wild birds can be infected with HPAI and show no signs of illness. They can carry the disease to new areas when migrating, potentially exposing domestic poultry to the virus. The DNR does not anticipate any serious impact on Michigan’s waterfowl populations.

Highly pathogenic avian influenza primarily affects birds but is also a zoonotic disease or one that has the potential to pass from domestic or wild animals to humans. According to the U.S. Centers for Disease Control and Prevention, the public health risk associated with HPAI remains low but advises people to avoid handling any sick or dead wild birds.

• Harvest only waterfowl that act and look healthy. Do not handle or eat sick game.

• Field dress and prepare game outdoors or in a well-ventilated area.

• Remove and discard intestines soon after harvesting and avoid direct contact with the intestinal contents.

• Do not eat, drink, smoke or vape while handling carcasses.

• When done handling game, wash hands thoroughly with soap and water (or alcohol-based hand sanitizer if soap and water are unavailable), and clean knives, equipment and surfaces that came in contact with game. Wash hands before and after handling any meat.

• Keep waterfowl cool (either with ice or refrigeration) below 45 degrees Fahrenheit until processed, and then refrigerate or freeze.

• Thoroughly cook all game to an internal temperature of 165 degrees Fahrenheit before eating it.
Help prevent the spread of HPAI

• Immediately report wild bird deaths to your state wildlife management agency so that bird die-offs can be investigated and tested for avian influenza. In particular, die-offs involving six or more birds should be reported. Sick, dead or neurologically abnormal wild mammals also may be cause for concern, so please report those, too.

• Call a local DNR wildlife field office to speak to a field biologist.

• Use the DNR’s Eyes in the Field app. Choose the “diseased wildlife” reporting option.

• Prevent contact of domestic or captive birds with wild birds.

• Do not handle sick or dead wildlife. If it is necessary to do so, use a shovel, wear impermeable gloves, wash hands with soap and water, and change clothing before having contact with domestic poultry or pet birds.

Moriarty encouraged the public to continue sharing wildlife observations, even though the DNR will be unable to respond to every person submitting a report.

“It just takes a few minutes, but each report about birds and animals that are sick or appear to have unexplained deaths, especially in clusters, is a tip that often can lead to valuable information about a wildlife community,” she said. “We appreciate every effort to share those observations. While every bird or animal will not necessarily be tested for HPAI, all such observations are important and contribute to our understanding of this outbreak.”