Big bucks can break your heart

Deer hunt long enough, and it will happen. A buck with an uncanny ability to evade, is lucky and causes intense feelings of infatuation. This happened to me two years ago, in July. My trail camera revealed this beautiful 8-pointer standing on the trail’s edge, nosing some overhead branches. It was the last picture I had of that buck in 2020. I hunted every day I could but finally arrowed a very nice 8-point farm buck that anyone would be proud. 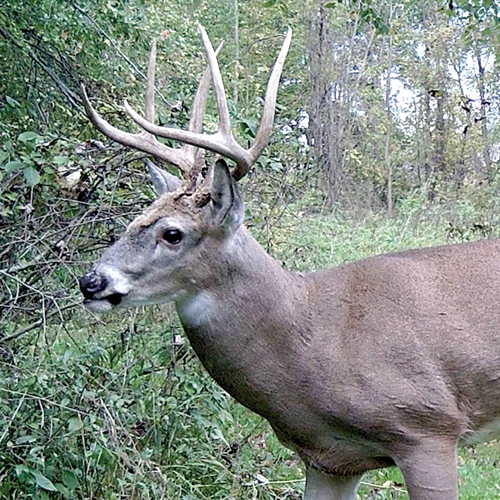 Fast forward to July 2021, and not only was he back, but his main bedroom was up an old lane on my property. Dozens of beautiful pictures in the morning, mid-day, afternoon, and evening. I couldn’t wait to get in the woods to hunt this guy. Then he was a beautiful 8-point. His rack was only approximately an inch wider than his ears, but he was very tall, with G-2s easily going 14 inches long. He was by far the best buck I’ve seen on my place in 15 years, and he hadn’t been spooked too much as he kept showing up in front of my camera during daytime hours.

On October 1, I was ready to rock. I looked at my wind app and decided to hunt one of my box blinds overlooking a food plot. The morning of the opener was uneventful. I settled back for the evening hunt as my neighbor was combining beans. Dust and shucks were filling the air all over my viewing area when a doe and twin fawns came into the food plot. Approximately 20 minutes later, I looked to my right, and a very large buck was coming into the food plot, and he wasn’t happy. Ears down and walking stiff-legged, he was putting on quite a show.

I thought he would scatter the doe and her fawns and start eating. Much to my surprise, the big-seven bolted toward one of the fawns and tried to kill it. He had it down for a second and tried to gore it and stomp it. The fawn got up and broke for its only exit, right into the base of my blind. A loud “thunk” shook the whole blind.

I was shocked that this was taking place on October 1. The big buck stood ugly, ears straight down, hunched over. It was clear he wasn’t done with the fawn who was now trapped between my blind and some big stickers. I put my crossbow scope on his vitals and sent one right through his boiler room at 10 feet. He ran about 50 yards and died in a big swale at the end of my field. The dressed weight of the buck was 228 pounds. It would be the biggest-bodied buck I had ever harvested.

Since I had purchased the deer combo license, I could still chase the big buck that had still been showing up on my trail cams up until October 10. Then the big eight disappeared with no more trail cam pictures. Knowing where his primary bed was, I wondered if someone had harvested this beautiful buck. After all, our little section has well over a dozen bowhunters hunting hard.

November came, and the rut intensified. I had a few sightings of nice bucks and had passed on three nice eights, but it was obvious my target buck was no longer using that old bedding area and, in fact, hadn’t been on my property for weeks as I had trail cameras on every deer trail and pinch point. I was having a rather tough go myself with a bad hip that needs some work. The walk back to my blinds was getting more painful by the day. I kept hunting and hoping.

Opening day of gun season, and I’m back in my stand. I see a nice eight-point working through my switchgrass field. My options flashed through my little brain. Take this eight; I will have harvested nice bucks on opening day of bow and gun season.

I’ve never done that in 48 years of deer hunting. No more painful walks into my blinds. I can get my boat hooked up and head to Erie for some big fall walleyes. I hadn’t seen the big buck in over a month. When the eight-pointer got close, I dropped him in his tracks. I tagged out, but remorse was already setting in. Deep down, I knew what was coming.

Every one of you knows what happened next. Three days later, the big buck comes out of my woodlot, strolling towards my apple orchard. I started to see him regularly again, even during daytime. He did have a wound on the right side of his neck from fighting. I saw him again in January but never saw him after. I was sure hoping to catch a glimpse this summer, but as of the opener of bow season, not a glimpse.

I’m not optimistic he is alive, as even if he was in an adjacent section, I have to believe he would move through his old bedding area at some point. I know bucks can suddenly reappear. But I’m kicking myself every day thinking about this buck. I know we can’t take a big buck by harvesting little bucks. Nothing will drive that home more than my last deer season. I hope you have a great deer season. I hope to see you at the buck pole with a big ole buck.