In addition to Michigan being home to pileated woodpeckers, the largest woodpecker in North America, we are also home to the downy woodpecker, the smallest woodpecker on the continent. With winter weather taking firm hold, now is the time to watch for both species if you have a properly stocked bird feeder and are situated in good habitat. Properly stocked means having suet! I see both species often and, at times, think they are dueling for my attention. 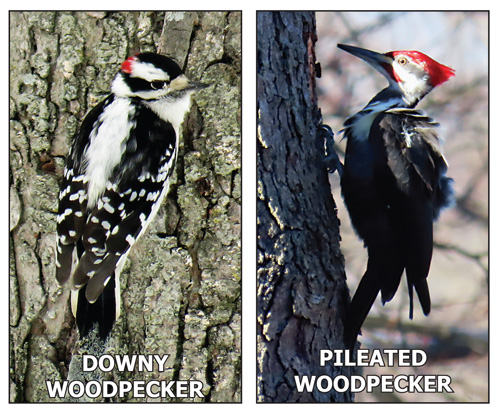 I’m pleased to have downy woodpeckers at my feeders daily. Every once in a while, a pileated woodpecker lands on an adjacent tree to search for bugs and beetles in the cracks of the bark and occasionally comes to my window-mounted suet feeder. I suspect it’s leery of the creature (me) on the other side of the window, thus its infrequent visits. Downy woodpeckers are far more abundant throughout Michigan and far less “people shy” than our forest giant, the pileated woodpecker. Size differences are obvious even for someone who does not have “wildwoods wisdom” or frequent encounters with our natural world—size matters when identifying these birds. A pileated is about 18 inches long, including the tail feathers, while a downy is barely six inches long.

The hairy woodpecker looks very much like a very large downy, but with a bit of identification experience, it’s easy to tell the two species apart. Think of the size differences between a deer and an elk, with the downy being the deer! That’s a good comparison, and the Audubon Society suggests looking at the bill to know which species you have. “The Downy’s bill is dainty and about one-third the length of the bird’s head. The Hairy’s bill is a railroad spike in comparison and as long as its head.”

It’s all about habitat, and in my neck of the woods, Oakland County, woodpecker habitat improved as a result of the onslaught of the invasive emerald ash borer back in 2002 causing the demise of our ash trees. Good habitat, which in the case of woodpeckers, often means dead trees, means more woodpeckers.

Now and then, when I’m out with the public and woodpeckers are seen, I am asked if they get headaches from pounding on trees. My answer is that contrary to myth, woodpeckers do not get headaches from banging away on a tree, a telephone pole, or the wood siding of your home, with the emphasis on the word “your’ to hold their attention. These master craftsmen have evolved powerful neck muscles, thick skulls and chisel-like bills that let them chip away at tree trunks with ease as they search out bugs or create the perfect nesting cavity. And woodpeckers have a special skull bone, the hyoid bone, which functions a bit like a seatbelt for their brain. Their hyoid bone diverts impact and vibrations away from the cranium, and the woodpecker pounds on, free of headaches. If kids are in the group, the “seatbelt for their brain” comment brings smiles, sometimes for adults as well.

Winter has arrived, and with the rapid change of seasons, these two species of woodpeckers that are year-round residents of Michigan are being seen and heard more often for the simple reason leaves are down, making them more visible and more audible. As for more audible, canopies of leaves muffle sound, but on our crisp cold days, the vocalization and the pounding of woodpeckers carry a long distance

Although winter had barely begun when I wrote these words on the last day of November, it won’t be long before both species start planning for nesting. Downy woodpeckers nest in decaying limbs and snags, and I’ve heard from birder friends that they prefer small dead trees that lean to one side. And as some observant birders have noted, the entrance to their nesting cavity is usually on the side that leans downwards. That act of construction wisdom just may add protection from high winds, snow and heavy rains. Downy woodpeckers and their nesting cavities often go sight unseen, but there is nothing subtle or discreet about the work of the pileated woodpecker. These red-crested forest giants leave obvious signs of their woodworking skills as they whack away for tasty carpenter ants or carve nesting cavities. Both species may be ‘“hick-skulled,” but they are not short of survival techniques in the woods of Michigan.

Jonathan Schechter is a naturalist in Oakland County. oaknature@aol.com