Tip-ups have been around forever, but their use has transformed…

It’s that time of year when almost all Michigan anglers can agree on one thing – they won’t be doing much fishing in the next couple of months unless they cut a hole in the ice to start. Ice fishing will be on everyone’s radar until the weather reverses and we have soft water again.

As with open-water fishing, there are numerous ways to chase the fish around, even if you’re not moving much. And using a combination of techniques will help you catch more fish. Often different techniques work together so that the whole is more than the sum of the parts. It’s common, for instance, for two guys sharing an ice shanty with one jigging and the other using a dead rod to improve their overall catch. The jigging attracts fish, which will be attracted to the spoon or swim jig, but will strike the suspended minnow after they come in.

And that brings us to using tip-ups.

As I’m sure you know, tip-ups are devices used to suspend bait. They are most commonly known for pike fishing but can be used for anything from lake trout to perch and, in recent years, are being used more commonly by walleye anglers. I’ve had many days on the ice when tip-ups outperformed all other techniques, sometimes all other techniques combined.

Tip-ups have been around for almost forever. But the use of tip-ups has been transformed from a very basic approach to a nuanced presentation. I call it finesse tip-up fishing.

When I was a kid, tip-up anglers often used heavy line and a treble hook big enough to hold a whale. Now, as with other finesse presentations, tip-up anglers use light leaders and small hooks to entice walleyes to bite. 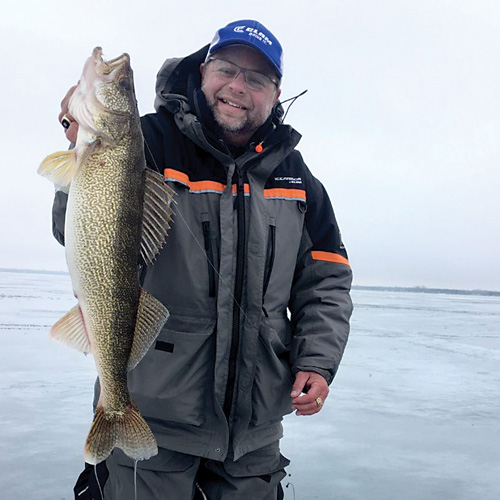 The author still uses 30-pound test Dacron line. But he ties it to a tiny swivel and a two-foot length of six-pound fluorocarbon and a size 14 treble hook hooking the minnow in the back.

I still use the same main line as I did when I started fishing with tip-ups 50 years ago, 30-pound test Dacron line. But instead of tying it to a steel leader and a hook big enough to suit a one-ounce spoon, I tie it to a tiny swivel and a two-foot length of six-pound fluorocarbon and a size 14 treble hook. And instead of hooking the minnow under the dorsal fin, I hook it through the upper back about halfway between the dorsal fin and the tail. That keeps the minnow alive longer and causes it to swim more naturally on the hook.

I typically suspend the minnow about a foot off the bottom, using the tiniest split shot I have to get it down. But I am not afraid to raise it higher in the water column if I see fish on the depth finder suspended well above the bottom.

First, when setting tip-ups, find the bottom. Once I find the bottom, I attach a small bobber, the smallest I can, that will float the minnow. The bobber has two uses. For one, if you get a flag tripped by the wind, you can tell almost immediately that it’s a wind trip instead of a strike. If the bobber is still floating, you know a fish hasn’t pulled the bait to trip the flag.

But fish will often drop the minnow after they take it, and if they do, the bobber will float the bait back up off the bottom so it’s still swimming and you’re still fishing.

When a fish takes a bait, it will generally move off with it. You watch the reel spin until it stops, grab the line and hold it, and let it go if it starts moving again. You may have to do this several times before the fish takes the bait deeply enough into its mouth to get hooked. Take your time!

When you feel steady weight on the end of the line, instead of setting the hook dramatically – like a bass fisherman using a plastic worm – just lift it. You are using light line, and you can easily break it setting the hook on a big fish. The small, sharp hook is almost like Velcro. It’ll stick in the fish’s jaw.

When you start retrieving the line, be aware that the fish may run again. If it does, drop the line and let the fish take it. You may have to do this several times. Don’t get in a rush.

As you retrieve line, throw it downwind. You don’t want it tangling up on the tip-up on the ice. And always use dark-colored main line. Black is good, as you can see it against the ice because if it sticks to the ice, you have to be able to free it when fish are taking line. Again, remember you have a light leader.

There are dozens of models of tip-ups on the market, but these days I prefer the round ones by Clam because they cover the hole and keep it from freezing up in the hole if the blowing snow causes that to happen.
Always set your tip-ups close to your shanty. When you’re jigging in your tent, you are attracting fish. If the minnow on the tip-up is nearby, a fish, attracted to your jigging lure, might just swim over to the minnow and take it. This is making your techniques work together.

As with any other style of fishing, the devil is in the details. Good knots, light tackle and sharp hooks all result in more fish landed. And don’t be overly worried about the light tackle. At one of my ice fishing schools, one student landed a 40-plus inch pike that weighed 20 pounds on this rig. It took him 45 minutes to get it, but it was the biggest fish of his ice fishing career.

Speaking of my fishing schools, I have three scheduled for this upcoming season. We’ll be at Houghton Lake Jan. 8-11, Mullet Lake Jan. 29 to Feb.1, and Saginaw Bay Feb. 12-15. Spots are filling up fast, and although we cover the whole gamut of ice fishing techniques, from properly setting up your electronics to jigging to dead-rodding, we spend a lot of time on properly setting up and using your tip-ups. The result is catching more fish, I guarantee it.