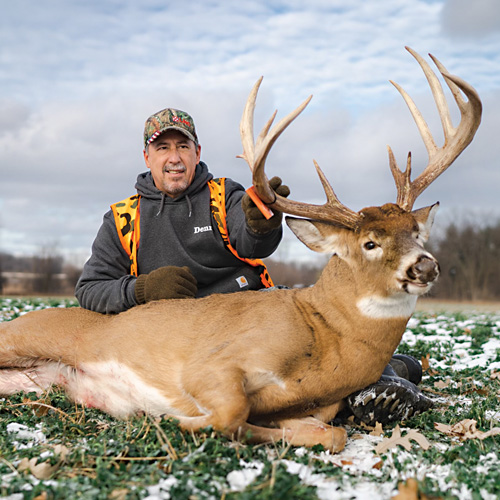 According to Dennis Colmer; “It was an exciting and humbling day as I realized how blessed I was to have this trophy deer fall into my lap…” The buck weighed 190 lbs. and rough green scored 184 3/8”!

The story of my experience with this buck began in late August of 2021. My wife and I had purchased five acres of alfalfa farmland in the spring of 2021 and were in the middle of constructing our new home by that summer. One evening, after the skilled trades workers had left for the day, my wife and I were spending time at the construction site, and she called me over to the kitchen window. She pointed to a nice buck that had appeared in the back half of the alfalfa field. I hustled to my truck to grab my binoculars to get a better view. The buck was a nice ten-point that anyone would feel fortunate to harvest during the next hunting season.

As I continued to watch this deer, I noticed some additional movement to the east, followed by the entrance of another buck that seemed to dwarf the original ten-point. It didn’t take me long to come up with a nickname, and Frazier had it all: height, width and mass. Little did I know that he and I would have a crash course meeting fifteen months later.

After catching our first sight of him in August, me and my buddy Greg hunted him hard throughout the 2021 season. It wasn’t until late muzzleloader season that Greg had his first encounter with Frazier, the biggest buck we had ever seen on their property in our memory. Unfortunately, daylight was fading and became Greg’s enemy. He could have gambled, I supposed, but he decided not to risk it. Greg gets a lot of my respect for that decision. Many hunters would have pulled the trigger on a buck of that caliber despite the fading light, and I have sometimes wondered if the roles were reversed, would I have been disciplined enough to do the same?

It was an unfortunate evening, but now we knew Frazier was still alive and spending time in our area. The 2021 hunting season was close to the end, but it gave us renewed hope for the 2022 season.

When the summer of 2022 arrived, the bucks started making their appearance sporting their new velvet antlers, and Greg and I got busy strategically placing game cameras. To our relief, it did not take long before a familiar buck started to show up on our cameras. We had a half dozen or more pictures of this great buck, and once again, he got our hearts pumping and did not disappoint the eye. October could not come soon enough for us.

On October 1, it was with great anticipation that we hoped one of us would cross paths with this buck in person. The first three and a half weeks of October were pretty uneventful. It was as if the solid 11-point we had seen on camera had disappeared from the area. It wasn’t until late October that my buddy Greg once again had an encounter with what had become our “target” buck, and this time there was plenty of daylight. The buck got as close as sixty yards, but as it turned out, that was as close as it got. Greg admitted that he didn’t routinely practice that distance, and for that matter, neither do I, so once again, my buddy took the high road of ethics and did not risk a shot.

It wasn’t until the fifth day of gun season 2022 that I would finally have my first encounter with Frazier. I climbed into my blind at 5:30 a.m. and waited for daylight to arrive. There was a perfect southwest wind between 10-14 mph, and the ground was blanketed with snow when the sun started to rise. The deer movement started early, about sixty yards south of me behind some thickets. I pulled up my binoculars to get a better look at what I was seeing, but couldn’t identify anything. I lowered my binoculars and saw movement again in the brush. I tried to locate the movement with my binoculars a second time but again was unsuccessful. It’s amazing how well deer can blend in with their environment.

I decided to leave my binoculars down and just stay focused with my eyes when I heard something to the west of me. I slowly turned to identify what I had heard, and 20 yards away was the biggest buck I had ever seen. This buck that had so inspired us on camera, was much more impressive in person, and he was making a slow and steady march toward me.

People asked me if I was nervous. Fortunately, it all happened so quickly that there was no time for the nerves to set in. All I could think about was to get the gun up, get the crosshairs on him, and let it go. And that’s exactly what I did. When my shot fired, the biggest buck I’ve ever personally seen dropped right in its tracks about thirty-five yards away, and an excited voice in my head shouted, “Down goes Frazier, down goes Frazier!”

I couldn’t believe what had happened; sometimes, it still doesn’t feel real. Once a few of my buddies; Greg, Scott, Craig and Darryl (thanks for the help, guys); and I got Frazier back to the barn, neighbors from around the area started showing up to see this trophy of a lifetime and to share their own stories of having seen Frazier on their cameras, yards and fields. This buck’s rack was nearly perfectly symmetrical; the main beams both measured 24 5/8 inches, and the 11-inch G1s and G2s were ½ inch different from left to right, and it had a 20-plus inch inside spread, a gross rough green score of 184 3/8.

It was an exciting and humbling day as I realized how blessed I was to have this trophy deer fall into my lap at 7:20 a.m. on November 19, 2022, with my twelve-gauge Remington 1187 that my wife bought me for Christmas many years ago that has never let me down, so a big thanks to her!